The past financial year saw a roller coaster ride for investors. Share markets plunged into Christmas only to rebound over the last six months. This note reviews the last financial year and takes a look at the investment outlook for 2019-20.

A volatile but good year for diversified investors

The past financial year saw pretty good returns for investors. But it didn’t feel so good around Christmas as a combination of worries – President Trump’s trade war with China, a slowdown in China, Fed rate hikes, an end to quantitative easing in the Eurozone, falling property prices and election fears in Australia saw share markets fall sharply. In fact, from its September high to Christmas Eve US shares plunged 20%. But in the last six months share markets have rebounded as while the trade threat has run hot and cold and tensions in the Middle East have escalated central banks have turned dovish with many either easing (like the RBA and PBOC) or signalling that monetary easing is likely (such as the Fed and ECB). This has seen global share markets rebound sharply with Australian shares having their best June half since the early 1990s – helped along by the return of the Coalition Government.

Cash and bank deposits had poor returns not helped by the RBA cutting the cash rate to a new record low in June. But bonds had a spectacular turnaround as rising bond yields on the back of Fed tightening a year ago gave way to plunging yields – to record lows in many countries – as inflation subsided and central banks turned dovish resulting in Australian bonds returning 9.6%. The plunge in bond yields reinvigorated the search for yield and so helped yield-sensitive listed property and infrastructure have strong returns. Unlisted property and infrastructure continued to do well, despite a rougher ride for retail property. Balanced growth superannuation funds are estimated to have returned around 7% after taxes and fees. For the last five years their returns have averaged around 7.4% pa, which is not bad given sub 2% inflation. 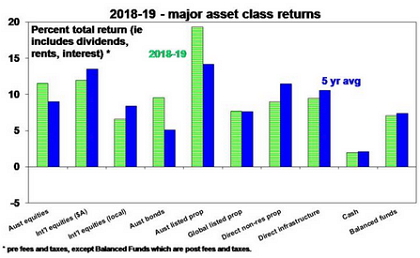 Australian residential property fared poorly though with average capital city prices down 8%, but signs of stabilisation have emerged recently helped by the election result and rate cuts.

Key lessons for investors from the last financial year

The negatives which will likely constrain returns…

There are a bunch of threats which are likely to lead to bouts of volatility and constrain returns. 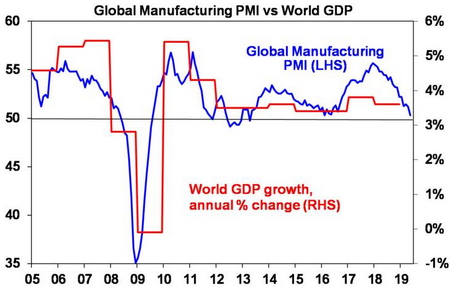 …but a bunch of things should keep returns positive

What about the return outlook?

The threats around trade and geopolitical risks along with the tendency for seasonal weakness out to September/October could see a pull back in share markets and returns are likely to be constrained. But easy money and the absence of large-scale economic excess should help extend the cycle and keep returns positive at around 6% over the next 12 months from a well diversified portfolio. Looking at the major asset classes: 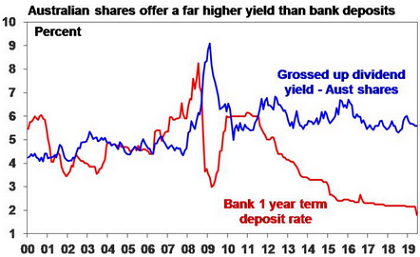 Things to keep an eye on

The key things to keep an eye are: global business conditions PMIs for any deeper slowing; the trade war – this needs to be resolved soon; Middle East tensions around Iran; US political risks; risks around Chinese growth; and Australian unemployment and house prices.

Returns are likely to be okay over 2019-20 as conditions are not in place for recession. But expect constrained returns – say around 6% for a diversified fund – and bouts of volatility.