With the COVID-19 coronavirus crippling the Australian economy and affecting livelihoods, the Australian Federal Government has announced a range of measures to support both businesses and individuals.

The total stimulus announced to date is worth $189 billion, or 10% of the size of the Australian economy, and the government has said more financial support will be announced over the coming months.

Here we explain some of the benefits you may be eligible for.

For the next six months, the government will establish a new coronavirus supplement worth $550 per fortnight. This will be paid to both existing and new recipients of JobSeeker Payment, Youth Allowance Jobseeker, Parenting Payment, Farm Household Allowance and Special Benefit, doubling the payment for those currently on these benefits to $1,100 per fortnight. Students receiving Youth Allowance, Austudy and Abstudy will also be eligible.

Asset tests and waiting periods that typically apply to these types of payments will be waived, and eligibility will be extended to permanent employees who are temporarily stood down.

Sole traders, the self employed, casual workers and contract workers whose volume of work has been affected may also be eligible, provided they’re earning less than $1,075 a fortnight. These payments will begin from 27 April 2020.

The government is providing two separate, tax-free $750 payments to social security, veteran and other income-support recipients, including those on the Age Pension, and eligible concession card holders.

It’s expected that up to 6.6 million people will be eligible for the first payment and around five million for the second payment, with around half of these pensioners.

Applications can be made online from mid-April by using myGov. Members will self-certify that they satisfy the eligibility criteria. Please contact us to discuss.

To assist those in retirement the government is temporarily reducing minimum super drawdown requirements for account-based or allocated pensions, annuities and similar products by 50% for the current financial year and the 2020-21 financial year. This should reduce the need for retirees to sell investment assets in the current soft sharemarket conditions to fund their minimum drawdown requirements.

In addition, the upper and lower social security deeming rates will also be reduced by 0.25% from 1 May in recognition of the impact of persistent low interest rates on retirees’ savings. This comes on top of a 0.5% reduction announced earlier in March.

The government says the change will benefit around 900,000 income support recipients, including around 565,000 people on the Age Pension who will, on average, receive around $105 more from the Age Pension in the first full year that the reduced rates apply. 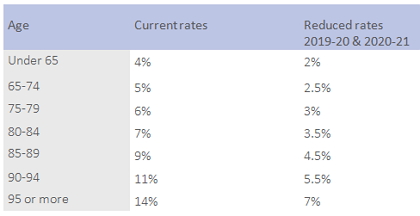 The state and territory governments have also announced economic stimulus packages. The majority of these have so far focused on businesses, however there have been a few measures for individuals, including:

Outlook for the Australian economy

AMP Capital Senior Economist Diana Mousina says that while the government stimulus is welcome, it’s unlikely to be enough to keep Australia from falling into recession.

Ms Mousina says that the combined economic impact of the summer bushfires, lower Chinese tourism and education spending, global coronavirus shutdown and recessions in the US and Europe will all take a toll, however the government’s spending measures should help to limit the severity of the downturn.

“The fiscal stimulus package will help in limiting the depth of the Australian recession, it will help to keep companies afloat (and should provide some limit for keeping the unemployment rate from skyrocketing) and it is necessary to get a strong recovery after the virus has run its course.”

Due to the uncertainty around the country’s economic position, the Federal Government has also announced that it will postpone the next Federal Budget. The budget is usually handed down in May, but has been postponed until 6 October 2020.