For some time our view has been a less upbeat on the Australian economy than the consensus and notably the RBA. The reasons were simple. The housing cycle has turned down and this is weighing on consumer spending. And this is at a time when the risks to the global economy have increased as the trade war threat has ramped up again. All at a time when high levels of underemployment are keeping a lid on wages growth and, along with technology and competition, inflation. Consequently we have been expecting rate cuts this year which have now commenced and have further to go. We see a strong case for more fiscal stimulus to help the RBA in boosting growth and see an increasing risk that the RBA may have to use some form of quantitative easing to achieve its inflation target.

But the gloom around the Australian economy seems to have gone over the top lately with all the talk around rate cuts adding to the sense of malaise and more and more talk about a recession being inevitable. Surely it can’t be that bad! And why despite all this doom and gloom is the share market at an 11-year high, up 16% year to date and just 4% shy of its 2007 resources-boom high. There must be some positives around. And there are! So, to inject some balance into the debate around Australia here is a list of positives. They are partly why we don’t see Australia as being about to plunge into recession.

As a share of GDP, it’s the lowest since the 1970s as high iron ore prices have combined with solid growth in export volumes and pushed the trade balance into a record surplus. The current account deficit is the gap between what we spend as a nation and what we earn – so its near disappearance means we are less dependent on foreign capital. This is a big one given that a big scare of the 1980s in Australia was that the large current account deficit and rising foreign debt would lead to a major crisis, collapse the economy and require an IMF bailout. Like with most doomster stories on Australia, we are still waiting! 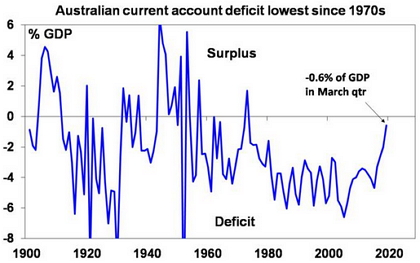 The $A is down 38% from its 2011 high and is likely to fall further and this provides a shock absorber for the Australian economy as a lower $A makes Australian businesses that compete internationally more competitive – eg higher education, tourism, mining, manufacturing, agriculture.

3. The drag from falling mining investment is over

The big drag on growth (which was up to around 2 percentage points at one stage) as mining investment fell back to more normal levels as a share of GDP is likely over and mining investment plans look to be moving up again.

4. There is scope for extra fiscal stimulus

The Federal budget is nearly back in surplus and while we have had a long run of deficits our public finances are in good shape compared to the US, Europe and Japan. 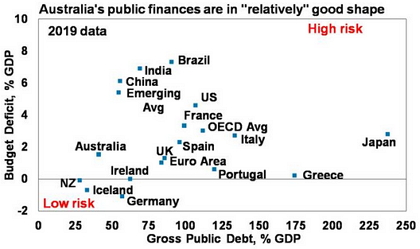 Some fiscal stimulus is already on the way with tax refunds for low and middle income earners. While the Government is focussed on achieving a surplus it seems to be recognising the case to do more to help the economy with talk of bringing forward infrastructure spending.

Despite the falls in property prices we have seen no sign of a “crash”. Non-performing loans are still relatively low even in Perth where prices are down nearly 20%. There has been no significant panic selling. The switch for many from interest only loans to principle and interest has not seen mass defaults or mass selling. And the combination of the removal of the threat to negative gearing and the capital gains tax discount along with rate cuts has seen buyer interest return.

While the Federal election has been analysed to death, the bottom line is that Australians as a whole were not prepared to support a populist agenda of higher taxes on the “top end of town”, substantially increased public spending and redistribution. Just like they weren’t prepared to support a more right-wing free market agenda in 1993. Australia is not immune to the populism seemingly sweeping the world, but it seems to be limited to a relatively minor influence. Maybe it’s the moderate climate, maybe it’s the lack of extreme inequality, maybe it’s the compulsory voting system that keeps motivated extremists in their place in favour of a sensible centre.

Whatever it is – economic policy making in Australia could always be better (economists would love to see a greater focus on economic reform) but it’s generally pretty sensible.

Australia’s population growth at around 1.5% pa is strong and supported by a high fertility rate and high levels of immigration. While it’s far from a world beater – with the top 10 countries by population growth seeing growth of between 3 to 5% pa – it is at the high end of comparable countries and roughly double the OECD average and of the US and UK and is faster than India.

Of course, strong population growth is not without issues –around integration, congestion, the environment, adequate housing and infrastructure. And ultimately in terms of living standards it is economic growth per person (or per capita) that matters not total growth and lately per capita GDP has gone backwards. But solid population growth also has significant benefits in terms of supporting demand growth in the economy, preventing lingering oversupply (as today’s excess – say Sydney apartments – can quickly turn into tomorrow’s shortfall) and keeping the economy dynamic. It also means that while Australia’s population is ageing, the problem is far less challenging than in most advanced countries as by comparison Australia with a median age of 37 is relatively young and it has a relatively low old age dependency ratio.

9. The RBA can still do more

While the official cash rate is at a record low of 1.25%, it can still go lower and we think it will, whereas in Europe and Japan rates are already at zero (or just below). Our view remains that the RBA will cut the cash rate to 0.5% beyond which it will probably conclude it’s of little benefit as it will make it harder for banks to pass on rate cuts as they will have more bank deposits at zero and so cutting mortgage rates would mean reduced profit margins and probably less lending.

But the RBA can still do quantitative easing – if needed. This basically involves seeking to boost the economy by injecting more cash into the economy using printed money. The lesson from the US, Europe and Japan was to go early and go hard. Japan and then Europe left it a bit too late, but the US went early and has achieved more success with QE.

QE as practiced there – using printed money to buy assets on the hope that banks would use the cash to lend, people would borrow and investors would help the economy by taking on more risky investments – may help. But it may not be the most efficient approach (as much of the cash just ended up in bank reserves) or the most equitable (to the extent it boosted prices for shares and other risky assets that are disproportionately held by high income/wealthier people).

A better option in terms of QE may be to use printed money to finance fiscal stimulus – maybe by directly buying bonds issued by the government. This is a radical step. The Austrian economists would scream hyperinflation! But they did with QE in the US a decade ago too and we are still waiting. In any case the problem is a lack of inflation and the risk of deflation. But it would work in terms of boosting spending in a fair way. It could involve either government spending on things like infrastructure (which both adds to demand and the economy’s productive potential) or tax cuts or “cheques in the mail” with use by dates.

But bear in mind Australia is a long way from needing to do this – we are not in recession so it’s really a debate about what can be done ahead of time which is actually healthy. Better this than wait for a crisis to hit then scramble on what to do.

Which brings us to the strong Australian share market. Much of the recent surge in the Australian share market reflects strong gains in mining stocks on the back of the strong iron ore price, strong demand for high yielding stocks as bond yields have plunged and the post-election bounce. And if global shares have a further setback on the back of trade fears then Australian shares will be impacted too. But it’s also worth noting that the Australian share price index has underperformed global share markets for almost a decade now reflecting tighter monetary policy from October 2009, the surge in the $A into 2011, the end of the commodity price boom, worries about a property crash and a mean reversion after Australia’s 2000 to 2009 outperformance. Many of these factors have run their course, have reversed or have been factored in by the share market so maybe the decade-long underperformance by Australian shares is coming close to an end. 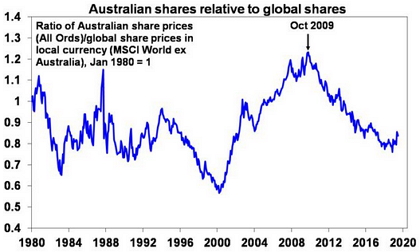 The point about all this is that while Australian growth may be going through a rough patch and this could go on for a while yet, there is a bunch of things going well for the Australian economy and there is plenty of scope for more monetary and fiscal stimulus. So – barring a significant global downturn threatening our export earnings big time – recession is unlikely, and it would be wrong to get too gloomy on Australia.