After the recent experience with the Brexit vote in the UK and election of Donald Trump as President of the US which are indicative of a nationalist backlash against the pro-globalisation establishment, there is a fear that Europe will go the same way with nationalist forces in Italy, Austria, France, Germany, etc, triggering a break-up of the Eurozone. Of course a break-up of the Eurozone has the potential to be a more traumatic event than the UK leaving the European Union or the change of Presidency in the US. This is because currencies would have to be re-denominated and borrowing costs pushed up in more heavily indebted peripheral Eurozone countries to reflect a likely sharp decline in the value of their new currencies, which would likely trigger a recession in them. At the same time the weakening of key European export markets would be bad for Germany. The threat of which could cause a return to the sort of global financial volatility we have seen during various flare-ups of the Eurozone public debt crisis since 2010, most recently in mid-2015 with worries about Greece (remember Grexit !)

Some see a Eurozone break-up as inevitable, but is it really?

Event risk in Europe to keep break up risk in focus

The next 12 months are scattered with numerous events in the Eurozone that risk adding to investor concerns about a break-up: the Austrian presidential election re-run and Italian Senate referendum both to occur this coming Sunday; parliamentary elections in the Netherlands in March 2017; the presidential election in France in late April/early May and parliamentary elections in June; German general elections around September; and of course ongoing risks regarding Greece.

Opinion polls in Austria are pointing to the election of the populist right wing candidate Norbert Hofer and Italian opinion polls are pointing to a “No” vote in the Senate referendum (designed to reduce the power of the Senate and make Italy more governable) which would thwart PM Matteo Renzi’s reform agenda which in turn could see him resign with fears that this will lead to an early election with the Euro-sceptic Five Star Movement (5SM) winning, calling a referendum on Italy's membership of the Eurozone which would then see Italy move to leave (Itexit). The political uncertainty that could be unleashed by an Italian “No” vote also risks throwing the recapitalisation of several Italian banks into turmoil which could threaten already weak economic growth further boosting support for 5SM. Reflecting all this Italian bond yields have risen from 1.1% to 2% over the last six months compared to a rise from -0.09% to 0.2% in Germany. In other words investors are demanding a higher premium again to lend to Italy for fear its Euro debt will be redenominated into lower value Liras.

However, a lot of water would have to pass under the bridge for Austria or Italy to leave the Eurozone. Firstly, I guess if after Brexit and Trump you no longer trust opinion polls you could argue that there is nothing to worry about as Nofer will lose the Austrian election and the “Yes” vote will win in Italy! (Actually the polls did an ok job on Brexit and Trump – it was the betting markets that were way out!) More fundamentally though, after marginally losing the first Austrian presidential election in May, Hofer has backed down on most of his anti-Euro rhetoric (no doubt in order to win the election) and so if he wins it wouldn’t mean an Ausexit (Austrian exit from the Euro) any time soon. Italy is more significant though but the Senate referendum's failure would just mean messy politics as normal in Italy (either under Renzi or an alternative). However, it’s unlikely there will be an election before the due date in 2018, and even if there was it’s not clear that 5SM would win. And even if 5SM were to win and call a referendum on Italy's membership of the Euro (which would first require a constitutional change), a majority of Italians support staying in the Euro.

Europe could be different

Looking at the big picture there are several reasons for thinking that Europe might be different – that a populist driven break-up won’t happen. First, Europe does not have the same issues with inequality that has driven the "leftist" backlash in the UK and US, which has helped fuel nationalist anger. It never really had the lurch to laissez-faire economics that Anglo countries saw in the 1980s and so has maintained a large social welfare state. This has helped redistribute the benefits of globalisation such that inequality has remained well below US and UK levels, as can be seen in the next chart which shows Gini coefficients (a measure of income inequality) are below average in Europe. 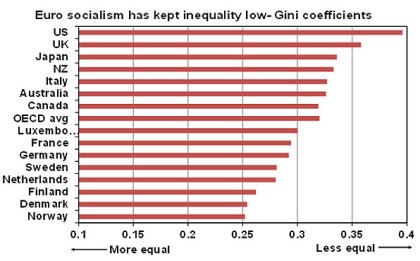 Third, despite the media excitement (made worse in Anglo countries who would love to see the Eurozone collapse) the increase in support for Euro-sceptic populists following Brexit and Trump has not really been overwhelming (next chart). 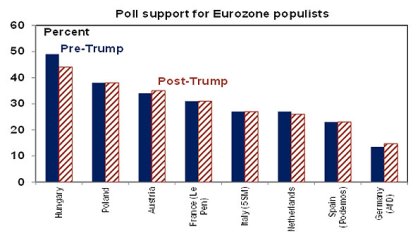 Fourth, support in mainland Europe for the Eurozone remains high. In the Netherlands its 75%, in France it’s around 67% and in Italy it’s around 55%. Basically the populists have to ditch anti-Euro policies if they wish to govern. Just look at Syriza in Greece which has gone from being a far left Euro-sceptic party to just another European centrist political party.

The commitment of continental Europeans to Europe and the Euro is arguably more about politics than economics. It’s rooted in being part of a stronger whole and a desire to avoid a return to the conflict that prevailed up until WW2. In part reflecting this, mainland Europeans are far more likely to see themselves as European than the British ever did. See next chart. 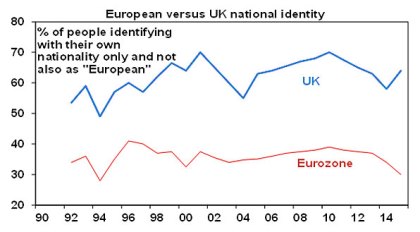 Perhaps the two main pressure points in Europe beyond slow economic growth are the migration crisis and fiscal austerity. But the migration crisis is abating as sea arrivals have collapsed from over 200,000 a month in October 2015 to below 3000 recently with mainstream governments now taking a tougher line on it. Meanwhile, fiscal austerity in Europe largely ended in 2013 (see the next chart) with the European Commission now recommending that member countries with fiscal space adopt a more expansionary fiscal stance.

Second, a “No” vote in Italy with risks for Italian banks along with political risk through next year will add to pressure on the European Central Bank to extend its quantitative easing program (and possibly step up Italian bond purchases). Which in turn will maintain downwards pressure on the Euro.

Finally, if we are right and the Eurozone continues to hang together then bouts of financial turmoil triggered by break-up fears are buying opportunities – just as we have seen since the Eurozone debt crisis began in 2010.

More broadly, after their post Trump rally shares have become overbought and vulnerable to various events coming up over the next few weeks (Italian referendum, ECB and Fed meetings), but after a pause shares are likely to resume their rally into year-end helped by reasonable valuations, continuing easy global monetary conditions, the prospect of fiscal stimulus in the US, a shift from falling to rising profits and the usual “Santa Claus” rally that kicks in around mid-December.