The surge in bitcoin has attracted much interest. Over the last five years, it has soared from $US12 to over $US8000; this year it’s up 760%. Its enthusiasts see it as the currency of the future and increasingly as a way to instant riches with rapid price gains only reinforcing this view. An alternative view is that it is just another in a long string of bubbles in investment markets.

Nobel Economics Laureates Daniel Kahneman, Robert Shiller and Richard Thaler and many others shown that investors and hence investment markets can be far from rational and this along with crowd psychology can drive asset prices far from fundamentally justified levels. This note provides a refresher on the psychology of investing before returning to look at bitcoin.

Irrational man and the madness of crowds

Numerous studies show people suffer from lapses of logic. In particular, they:

This is magnified and reinforced if many make the same lapses of logic at the same time giving rise to “crowd psychology”. Collective behaviour can arise if several things are present:

The combination of lapses of logic by individuals and their magnification by crowds goes a long way to explaining why speculative surges in asset prices develop (usually after some good news) and how they feed on themselves (as individuals project recent price gains into the future, exercise “wishful thinking” and receive positive feedback via the media). Of course this also explains how the whole process can go into reverse once buying is exhausted, often triggered by bad news.

The chart below shows how investor psychology develops through a market cycle. When times are good, investors move from optimism to excitement, and eventually euphoria as an asset’s price moves higher and higher. So by the time the market tops out, investors are maximum bullish and fully invested, often with no one left to buy. This ultimately sets the scene for a bit of bad news to push prices lower. As selling intensifies and prices fall further, investor emotion goes from anxiety to fear and eventually depression. By the time the market bottoms out, investors are maximum bearish and out of the market. This sets the scene for the market to start rising as it only requires a bit of good news to bring back buying.

The roller coaster of investor emotion 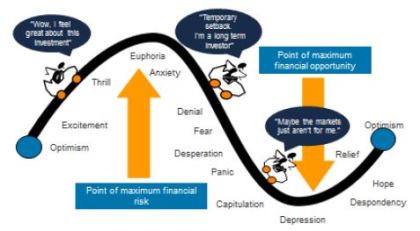 Where are we now?

Our assessment in terms of global share markets is that we are still around “optimism”. Investor sentiment is well up from its lows last year and some short-term measures are a bit high, warning of a correction (particularly for the direction-setting US share market) but we are not seeing the “euphoria” seen at market tops. The proportion of Australians nominating shares as the “wisest place for savings” remains very low at 8.9%.

But what about bitcoin? Is it a bubble?

Crypto currencies led by bitcoin and their blockchain technology seem to hold much promise. The blockchain basically means that transactions are verified and recorded in a public ledger (which is the blockchain) by a network of nodes (or databases) on the internet. Because each node stores its own copy, there is no need for a trusted central authority. Bitcoin is also anonymous with funds just tied to bitcoin addresses. Designed to work as a currency, bitcoin therefore has much to offer as a low-cost medium of exchange with international currency transfers costing a fraction of what, say, a bank may charge.

However, bitcoin’s price in US dollars has risen exponentially in value in recent times as the enthusiasm about its replacement for paper currency and many other things has seen investors pile in with rapid price gains and increasing media attention reinforcing perceptions that it’s a way to instant riches.

However, there are serious grounds for caution. First, because bitcoin produces no income and so has no yield, it’s impossible to value and unlike gold you can’t even touch it. This could mean that it could go to $100,000 but may only be worth $100.

Second, while the supply of bitcoins is limited to 21 million by around 2140, lots of competition is popping up in the form of other crypto currencies. In fact, there is now over 1000 of them. A rising supply of such currencies will push their price down.

Third, governments are unlikely to give up their monopoly on legal tender (because of the “seigniorage” or profit it yields) and ordinary members of the public may not fully embrace crypto currencies unless they have government backing. In fact, many governments and central banks are already looking at establishing their own crypto currencies.

Regulators are likely to crack down on it over time given its use for money laundering and unregulated money raising. China has moved quickly on this front. Monetary authorities are also likely to be wary of the potential for monetary and financial instability that lots of alternative currencies pose.

Fourth, while bitcoin may perform well as a medium of exchange it does not perform well as a store of value, which is another criteria for money. It has had numerous large 20% plus setbacks in value (five this year!) meaning huge loses if someone transfers funds into bitcoin for a transaction – say to buy a house or a foreign investment – but it collapses in value before the transaction completes.

Finally, and related to this, it has all the hallmarks of a classic bubble as described earlier in this note. In short, a positive fundamental development (or “displacement”) in terms of a high tech replacement for paper currency, self-reinforcing price gains that are being accentuated by social media excitement, all convincing enthusiasts that the only way is up. Its price now looks very bubbly, particularly compared to past asset bubbles (see the next chart – note bitcoin has to have its own axis!).

Because bitcoin is impossible to value, it could keep going up for a long way yet as more gullible investors are sucked in on the belief that they are on the way to unlimited riches and those who don’t believe them just “don’t get it” (just like a previous generation said to “dot com” sceptics). Maybe it’s just something each new generation of young investors has to go through – based on a thought that there is some way to instant riches and that their parents are just too square to believe it. 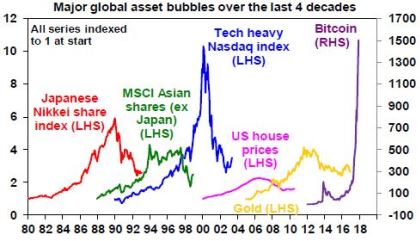 But the more it goes up, the greater the risk of a crash. I also still struggle to fully understand how it works and one big lesson from the Global Financial Crisis is that if you don’t fully understand something, you shouldn’t invest.

At this stage, a crash in bitcoin is a long way from being able to crash the economy because unlike previous manias (Japan, Asian bubble, Nasdaq, US housing in the chart above) it does not have major linkages to the economy (eg it’s not associated with overinvestment in the economy like in tech or US housing, it is not used enough to threaten the global financial system and not enough people are exposed to it such that a bust will have major negative wealth effects or losses for banks).

However, the risks would grow if more and more “investors” are sucked in – with banks ending up with a heavy exposure if, say, heavy gearing was involved. At this stage, I think it’s unlikely that will occur for the simple reason that being just an alternative currency and means of payment won’t inspire the same level of enthusiasm that, say, tech stocks did in the late 1990s (where there was a real revolution going on).

That said, it’s dangerous to say it can’t happen. There was very little underpinning the Dutch tulip mania and it went for longer than many thought. So it’s worth keeping an eye on. But as an investor I’m staying away from bitcoin.

What does this mean for investors?

There are several implications for investors.