Don’t fight the Fed… or the ECB or RBA

This decade has now seen three global growth scares – around 2011-12, 2015-16 and now since last year. Each have been associated with softening business conditions indicators (or PMIs) as indicated in the next chart – see the circled areas. 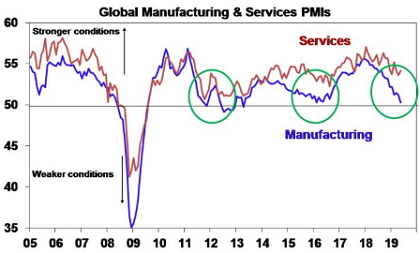 And each have been associated with roughly 20% falls in share markets. 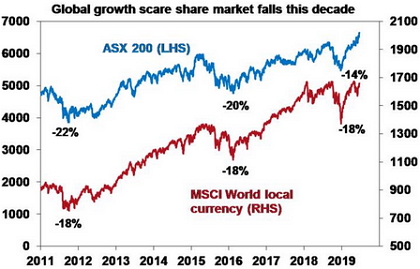 All have seen central banks shift towards easing to varying degrees. And in the first two this saw growth indicators pick up again and share markets rebound and clearly move on to new highs. We now seem to be seeing a re-run – at least with respect to central banks.

Central banks go from tightening to neutral to easing

It had looked like a shift from a tightening bias to a neutral/slight easing bias – the US Federal Reserve’s “patient” “pause” and end to quantitative tightening and the European Central Bank’s new round of cheap bank financing (what they call TLTRO) and pushing out its guidance on how long it won’t be raising interest rates for – would do it for the Fed and the ECB this time.

But then the trade war resumed in May adding to a new round of fears about global growth and inflation. And so the ECB and Fed look to be going beyond neutral and back to “whatever it takes”, joining central banks in China, India, Australia, New Zealand and other countries in easing: 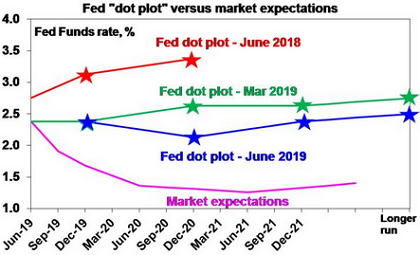 The shift towards monetary easing by the Fed and ECB risks ramping up currency wars again – at least in the minds of commentators – but as we have seen in the past this is just a means of spreading easing globally. And many central banks are already easing anyway.

This is of relevance to the Reserve Bank of Australia, which would prefer to see a lower Australian dollar. The Fed now moving towards easing does make the RBA’s job a little bit harder on this front. However, we still see the RBA easing more than the Fed as the Australian economy is weaker than the US economy and has much higher labour market underutilisation than the US (13.7% of the workforce in Australia versus 7.1% in the US). So, we still see the Australian dollar heading down to around $US0.65 by year end. But Fed easing which will weigh on the $US generally is one reason why the $A is unlikely to crash to past lows.

Presidents Trump and Xi to meet

In the meantime, Presidents Trump and Xi will meet at the G20 meeting in Japan next week. This could lead to a delay in the next round of tariff hikes on China – on the roughly $US300bn of remaining Chinese imports. Ultimately, I expect a deal to resolve the trade dispute because of the threat to growth in both countries (and the risks this poses to Trump’s 2020 re-election prospects). But given the false starts so far it’s not clear this round of meetings will do it just yet.

The risks are higher this time around given the trade war mess and with the US yield curve inverting – although it does give false signals, has long lags and may be distorted by the threat of more quantitative easing, recently it may more reflect a plunge in inflation expectations as opposed to growth expectations and the normal excesses that precede US recessions aren’t present to the same degree now.

And there will be bumps along the way, i.e.) shares could still go down in response to weak economic data and trade upsets before they go up and we are in a seasonally weak part of the year.

However, for investors it’s always worth remembering the old line “don’t fight the Fed”…or the ECB or RBA, etc. This is because low rates make shares cheaper and can help boost earnings.

While there is scepticism that central banks with the ultra low/negative rates and QE will do the trick, an investor would have made a huge mistake over the last decade betting against them!

So while the risks are higher this time around, my inclination is still to see the current period as just another global growth scare like those in 2011-12 and 2015-16 which will give way to somewhat stronger growth globally and higher share markets on a six to 12 month view.