Global political risks one year on from Brexit – what have we learned?

It's now 12 months since the British voted to leave the European Union, an event that some saw as setting off a domino effect of other European countries looking to do the same. This was also followed by a messy election result in Australia, Donald Trump's surprise victory in the US presidential election, increasing concern around North Korea and a steady flow of terrorist attacks. The combination of which seemed to highlight that geopolitics is now more important, and perhaps more threatening, for investors than had previously been the case. But while political developments have figured highly over the last year, the impact on markets has been benign. Since the Brexit vote, global shares are up 22% and Australian shares are up 13%. So what gives? This note looks at the main issues.

Why so little impact?

There are a number of reasons why the impact on investment markets from geopolitical events starting with Brexit has been short lived or non-existent over the last year or so: 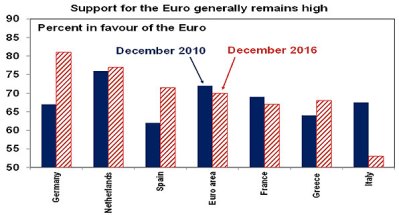 Where are we now with geopolitical risks?

While the events of the last year highlight the importance of not getting too excited about geopolitical events, they are likely to remain important for investors to keep an eye on. There are several drivers of increasing geopolitical tensions:

First, a backlash against economic rationalist policies (deregulation, privatisation and globalisation) because of the slow post global financial crisis (GFC) recovery, rising inequality in some countries and stress around immigration. The danger is that this results in re-regulation, nationalisation, increased taxes and protectionism and other populist responses, which could slow growth and share markets. However, it is worth noting that this backlash against free market policies is a messy theme. It’s most acute in the US and UK as this is where inequality is greatest. See next chart, which shows Gini coefficients – a measure of income distribution – for major countries.

Politics in the UK has clearly swung to the left. But in the US while Donald Trump has tapped into popular discontent it’s doubtful that his policies (eg, cutting healthcare and corporate tax cuts) will deal with rising inequality and could just set the scene for a more left wing (Bernie Sanders-like) candidate winning the 2020 presidential election. And of course in Europe inequality has been less of an issue as it has always been more to the left anyway. In fact, France appears to be heading in a more rationalist direction 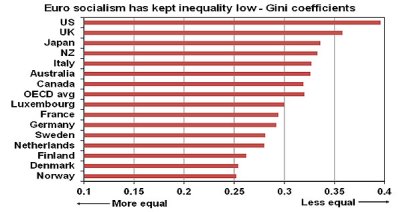 Second, the relative decline of the US is shifting us away from the unipolar world that dominated after the end of the Cold War when the US was the global cop and most countries were moving to become free market democracies. Now we are seeing the rise of China, Russia’s attempt to revisit its Soviet past and efforts by other countries to fill the gap left by the US in various parts of the world create geopolitical tensions – what some have called a multi-polar world. This is evident in increasing tension between Saudi Arabia and Iran, Russia’s intervention in Ukraine, and tensions in the South China Sea.

Global geopolitical issues to keep an eye on

The following looks at geopolitical issues worth watching.

German election (September 24) – Chancellor Merkel looks on track to win but if she doesn’t the centre-left Social Democrat Party under new leader Martin Schulz will and its more pro-Europe than Merkel. Either way the result is likely to be stepped up German support (with France) for Eurozone integration.

Italian election (due by May 2018, but possibly later this year) – Italy remains a risk as support for the Euro there is weaker and it could cause a new round of break-up fears once its election date is fixed. But the waning of populist support across Europe may have a spill over in Italy. The supposedly Eurosceptic Five Star Movement seems to be wavering a bit in its Euroscepticism. Even if it does win the most seats in parliament, it won’t get a majority and is unlikely to be able to form a coalition government. And even if it did and managed to move Italy towards an Itexit, a market panic would drive Italian bond yields sharply higher forcing a back down. In any case, the risk of a domino-like flow on from an Itexit to the rest of the Eurozone looks to be weak given recent European elections.

Greece – Greece seems to be creeping towards some form of debt forgiveness but this may have to wait until after the German election. In any case, there is no longer a populist Eurosceptic party for the Greeks to turn to.

More broadly, at some point investment markets will presumably tire of fearing each time an election comes up in Europe that there is the risk of some form of Euro exit. This issue has been going on since 2010 and all we have really seen is a progressive move to more Europe, not less.

The US – impeachment risk – The main risk for investors in relation to the US is that the noise – or should that be comedy – around the Trump/FBI/Russia issue distracts the political process to such a degree that Trump’s pro-business agenda stalls. Our view remains, though, that while the Democrats may find something to impeach Trump on when they get control of the House of Representatives (as seems likely after the November 2018 mid-terms) in the meantime the Republicans are unlikely to impeach Trump. Rather, anticipation of the likely loss of control of Congress after November next year will see Republicans pull together to pass their pro-business agenda. In this regard, note that the Senate is progressing on a health care reform, which is a precursor to tax reform.

The US – shutdown/debt ceiling risk – In September, funding will have to be renewed for the US Government to avoid a shutdown and by early October the debt ceiling will need to be raised again. Both are likely to happen – as 2013 showed, no side wants to be blamed for a shutdown or debt default.

Terrorism – The impact of terrorism on investment markets has been declining since the 9/11 attacks to the point where recent attacks in Europe have had little impact. While terrorist attacks are horrible from a human perspective most don’t really have much economic impact and, after a while, economies and markets become desensitised to them to a degree.

Iran v Saudi Arabia – Tensions between Shia Iran and Sunni Saudi Arabia are likely to remain but are very unlikely to break out into warfare between the two.

North Korea – The risk here has risen as its missile tests have increased and within a few years it may have the capability to lob a missile with a nuclear warhead into the US (or Australia). A US missile strike is possible but would risk significant loss of life in Seoul and beyond. So a diplomatic solution aimed at containment is the most likely. Time will tell if this is successful but trying to protect an investment portfolio against the uncertain timing of North Korean risk is a bit like trying to protect it against a nuclear war in the Cold War. 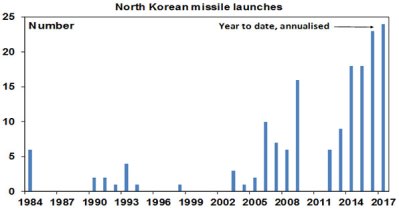 China/US relations – Trade and the South China Sea tensions are the main issues here. So far so good with Trump looking to work through the trade issue with China and cool heads prevailing regarding the South China Sea. How the renegotiation of the North American Free Trade Agreement goes will provide some guide as how Trump is proceeding on trade. But so far it’s been more rational than feared.

Based on the experience of the last year around geopolitical risks, there are several implications for investors:

First, turn down the noise. Geopolitical issues create much interest and are great for dinner party conversations, but as we saw over the last year this does not mean they will necessarily have a huge negative impact on investment markets.

Second, it’s hard to quantitatively build geopolitical risks into an investment process. You really have to understand each issue separately.

Finally, the ultra short-term impact of the Brexit and Trump election shocks – with both seeing an initial fall in share markets followed by market strength – highlights the benefit in looking for the opportunities geopolitical shocks throw up.