Higher global inflation and higher bond yields – what’s the risk and implications for other assets?

Since the Global Financial Crisis (GFC) there have been a few occasions when many feared inflation was about to rebound and push bond yields sharply higher only to see growth relapse and deflationary concerns dominate. As a result, expectations for higher inflation globally has been progressively squeezed out to the point that few seem to be expecting it. However, the global risks to inflation and bond yields are finally shifting to the upside, with investment markets starting to take note as evident in the pullback in global share markets seen over the last few days. But how big is the risk? Are we on the brink of another bond crash that will engulf other assets?

Inflation and bond yields – some context

But first some context. In a big picture sense, inflation has been falling since the mid 1970s-early 1980sThe global economy is finally emerging from its post-Global Financial Crisis (GFC) hangover. Talk of secular stagnation was overdone. Slow global growth since the GFC largely reflected a typical constrained aftermath from a major financial crisis. 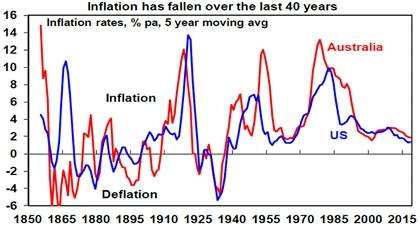 The fall in inflation over the last 30-40 years reflects: the inflation-fighting policies of central banks; supply side reforms that boosted productivity; globalisation that brought a billion or so workers into the capitalist system; and the benefits of the information technology revolution harnessed by the likes of Amazon and Uber. The fall in inflation in turn has been the main driver of a super cycle bull market in bonds, with yields trending down since the early 1980s. (Don’t forget, when bond yields fall, bond prices rise. Suppose the government issues a $100 bond paying $4 pa in interest for an initial yield of 4%. If investors push yields down to 3%, the bond’s price will be pushed up until the 3% yield is achieved with the $4 interest payment.) 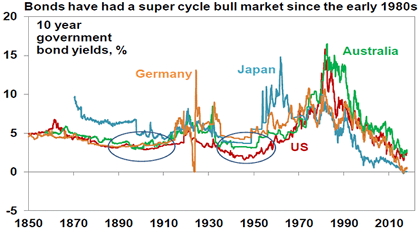 The collapse in bond yields into 2016 was accentuated by: worries about deflation; investors extrapolating very low official interest rates; worries economic growth will remain slow; safe-haven investor demand for bonds in response to geopolitical concerns and the experience that bonds always rally when shares fall; an increasing demand for income-yielding assets as populations age; and a shortage in the supply of bonds as budget deficits fell when central banks have been buying bonds. But the main driver since the early 1980s has been the fall in inflation.

Inflation and other assets

The 35-40-year fall in inflation and bond yields has also underpinned strong gains in most other assets. Put simply:

Inflation starting to stir globally, bond yields on the up

Since late 2016, our assessment has been that the super cycle bull market in bonds is over. This remains the case for several reasons. First, deflation risks are receding and gradually giving rise to inflation risks, led by the US: 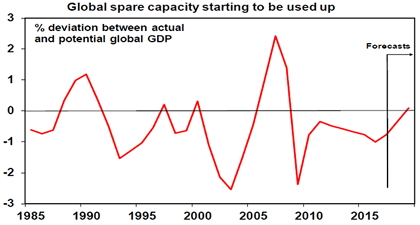 Thirdly, bonds remain over loved with a huge post-GFC inflow into bond funds in the US. (The same picture applies if ETFs are added in.) This leaves them vulnerable to a reversal if investor sentiment towards them turns really negative.

Finally, central bank buying of bonds is starting to slow.

For these reasons, it’s likely that the upswing in bond yields that began in the second half 2016, then paused last year and has since resumed, will continue.

Naturally as falling inflation gives way to rising inflation and bond yields head higher many assume the worst – such as a rerun of the 1994 mini bond crash or some sort of “perfect storm” where inflation takes off but central banks are powerless to stop it because high debt levels mean they can’t raise rates much. While we see bond yields rising, it’s likely to be gradual (like over the last 18 months) and a perfect storm is unlikely:

There are several implications from rising bond yields. Firstly, expect mediocre returns from sovereign bonds. Over the medium term, the return an investor will get from a bond will basically be driven by what the yield was when they invested. 10-year bond yields of 2.8% in Australia imply bond returns over the next decade of just 2.8% or so! And in the short term, rising bond yields will mean capital loses.

Secondly, higher bond yields will impact share market returns as they make shares more expensive. Shares will be okay if the rise in bond yields is gradual and so can be offset by rising earnings – as we expect this year – but a large abrupt back up in bond yields will be more of a concern. In any case expect a more volatile ride in shares.