Inequality- is it increasing? What’s driving it? And what it means for economic growth and investors

The issue of rising inequality has seen increasing interest over the last year or so, particularly following the Brexit and Trump votes for which rising inequality was seen as a key driver. This is an issue we have looked at before in terms of driving a swing to the left amongst median voters in Anglo countries and contributing to a backlash against economic rationalist policies (see “The political pendulum swings to the left”, Oliver’s Insights, June 2016 (http://bit.ly/1UWCUX1) but this note takes a more detailed look at the economic and investment implications.

Because inequality is a politically-charged issue, all sorts of numbers are thrown around with a favourite seeming to be the share of gross income going to a particular income group, say the top 1% or 10%. But this may not be the best guide because of the impact of progressive income taxes and welfare transfers. In fact, the best measure of income inequality is the Gini coefficient calculated on incomes after taxes and transfers. Basically it shows the variation between the actual distribution of income in a country and what would apply if it’s distributed perfectly equally. As such, it ranges from zero indicating perfect equality to one indicating perfect inequality with one household, or individual, receiving all income. Naturally, there is much debate about the data but the best available for global comparisons appears to be from the OECD and the Standardised World Income Inequality Database. The Gini coefficient from these sources is shown for various countries and for developed and emerging country averages in the next chart. 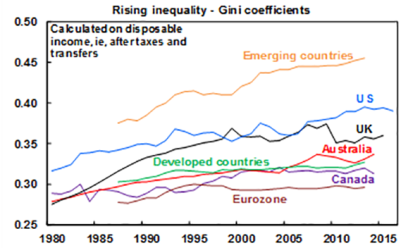 As might be expected, emerging countries are less equal than advanced countries but the key point is that there has been a general trend higher in inequality during the last 30 years. This is particularly evident in the emerging world and the US, but less so in the Eurozone where it’s actually been stable since the mid-1990s. There has also been a rising trend in Australia, although its stabilised since 2008 (and the data pre 1994 is less reliable). In terms of advanced countries, the US and UK are the least equal, and Eurozone and Scandinavian countries tend to be more equal. Inequality in Australia is above the OECD average but below that in the US and UK – see the next chart. 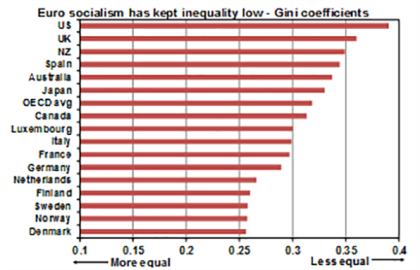 With rising levels of income inequality also appears to have come an increase in wealth inequality. After falling into the 1970s, the share of wealth in the US held by the top 0.1% has increased from around 7% to over 20%.  To some degree, rising wealth inequality is not that surprising as higher income earners save a higher proportion of their income and allocate a higher proportion of their savings to growth assets (like shares and property) that have higher long-term returns than bank deposits provide. So naturally their wealth will grow faster than that of lower income earners. Easy money from central banks post the Global Financial Crisis (GFC) may have contributed to this but returns from growth assets haven’t been in excess of pre-GFC norms, and the higher unemployment that would have followed if central banks had not run easy money would have arguably resulted in a far more significant increase in inequality.

What has driven the increase in income inequality?

The rise in the level of inequality likely reflects a range of drivers:

But why is it only causing angst now?

As the first chart shows, inequality has been trending up globally for many years so why has it become more of an issue lately? Prior to the GFC, rising levels of inequality were likely masked as either wages were rising solidly and/or people were able and willing to take on more debt. When your own income or at least your living standard is on the rise, you are less likely to take note of those better off than you are. But when your income growth slows and you are less able to take on more debt to make up for it, how the "better off" Jones’s are doing becomes a bigger issue.

This has been an issue for much longer in the US (with median real incomes reportedly stagnating since the early 1980s) but may be becoming an issue in Australia, too. The recent HILDA (or Household Income and Labour Dynamics in Australia report), which tracks roughly 7000 Australian households since early last decade, shows a flat Gini coefficient for its sample of households since 2001 (in contrast to the much broader measure shown in the first chart) but stagnant real median incomes since 2009 (see the next chart), suggesting it’s the weakness in incomes (made worse by record low wages growth) that’s the real issue.

Worker insecurity post the GFC, with higher levels of underemployment and rapid workplace change partly as a result of technological disruption, is likely adding to anxiety and tension around the issue of rising inequality. 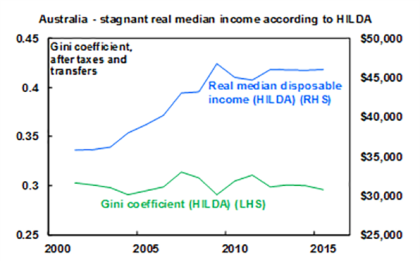 Angst around the issue may also be accentuated in Australia by the issue of poor housing affordability, with many millennials feeling that they are locked out of home ownership although this is perhaps more an intergenerational issue.

Why is rising inequality an issue economically and for investors?

A degree of inequality is essential in a free market economy to ensure there are incentives to be productive, invest and innovate. For example, it makes sense that wages and incomes grow faster in some usually higher skilled areas than others to encourage people to train and work in areas where there is stronger demand. However, (putting aside the debate about “fairness”) inequality that rises too high can reduce economic growth. It can do this because households with high disposable incomes save more and spend less than low income households who survive from pay day to pay day, and this will result in slower short-term economic growth. High levels of inequality can also create social tensions, which can disrupt production and investment and hence economic growth.

Inequality may become an even bigger issue going forward as technological innovation risks concentrating income and wealth in the hands of a few global winners, which could further drive up inequality over time. So for all these reasons, inequality is an issue that governments should be interested in.

The danger is that such a focus may lead to a return to economic policies, such as ever-higher top marginal tax rates, that discourage work effort, lead to a smaller national cake than would otherwise be the case, and a return to the worker versus boss confrontational environment that resulted in lower growth in productivity and living standards in the 1970s. This is particularly a risk in Australia where the tax system is already very progressive (with the top 10% of income earners contributing around 45% of total income tax revenue raised) and the top marginal tax rate is high by global standards.

The risk is that rising inequality and a populist response to it help drive a shift away from rational economic policies, which ultimately leads to slower productivity growth and eventually rising inflation as the supply side of economies is damaged. Which, in turn, will contribute to constrained medium-term investment returns. So the key for governments and policy makers in seeking to address the issue of rising inequality is to get the balance right between achieving an outcome which is fair and contributes to balanced sustainable growth but not going so far as to depress incentive and productivity.