The housing cycle and house prices always incite high interest in Australia. Until recently it was all about surging prices and poor affordability – particularly in Sydney and Melbourne. Over the last year it’s turned into how far prices will fall and what’s the impact on the economy. Global issues and the election aside, the housing downturn is likely to be the main issue for Australia in 2019. This note provides a Q&A on the main issues.

How far have home prices fallen?

According to CoreLogic data, up until December capital city dwelling prices are down 7% from their September 2017 high. This masks a wide range though with Sydney down 11% from its July 2017 high, Melbourne down 7% from its November 2017 high, Perth down 16% and Darwin down 25% from their mid 2014 mining investment boom highs but other cities continuing to trend up to varying degrees. Recently the declines have been led by Sydney and Melbourne. House prices are on average down more than unit prices and prices in regional centres have generally held up better than capital cities. 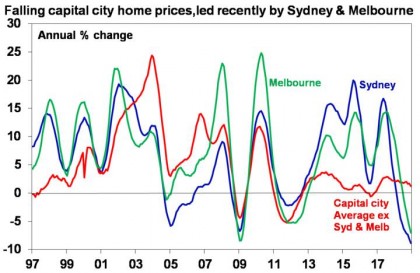 What is driving the falls?

The fall in property prices comes after a boom – most recently over the five years to 2017 that in particular saw Sydney prices rise 72% and Melbourne prices gain 56%. This, on top of gains since the mid-1990s, saw a sharp deterioration in affordability, prices become overvalued relative to income, rents and their long-term trend and reach expensive levels by global standards. The surge in home prices went hand in hand with a surge in debt that has seen the ratio of household debt to income go from the low end of OECD countries to the top end. High prices and high debt left Australian housing very vulnerable. What has changed in the last two years is that:

What will be the impact of tax changes?

The Australian Labor Party’s policy since the last election has been to limit negative gearing to new property and double capital gains tax on investments held for more than 12 months. This is aimed at improving housing affordability which means lower prices. Put simply, such changes would make it less attractive for investors to invest in residential property which would be negative for prices. A study by Riskwise Property Research and Wargent Advisory found that this would lower property prices ranging from 2 to 3% in Tasmania to around 9% in Sydney. While the tax changes are proposed to be grandfathered, it’s likely it’s already reducing investor demand as investors worry that when it comes time to sell their property if the tax changes occur then there will be less demand.

How far will home prices fall?

For Sydney and Melbourne our base case has been that prices would have a top to bottom fall of around 20% out to 2020. However, the further plunge in auction clearance rates and acceleration in price falls late last year suggest a deeper fall possibly of around 25% (although it’s impossible to be precise). This suggests around another 15% fall in Sydney and more in Melbourne. A 25% top to bottom drop would take prices back to where they were in late 2014/early 2015. 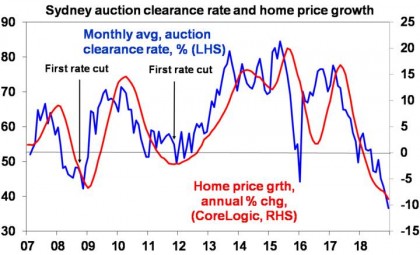 While prices in other cities are being affected by credit tightening they were less speculative and so are less vulnerable. Perth and Darwin have already seen prices fall back to decade ago levels. Other capital cities and regional centres generally didn’t have a boom and so are unlikely to have a bust. So for the rest of Australia flat prices to modest gains are likely. Taken together this suggests a top to bottom fall in national average prices of 10 to 15%, with another 5 to 10% this year.

This is a bit of an unhelpful question like the “are we in a property bubble” questions of a few years ago as it’s hard to define and implies a degree of inevitability in terms of the implications. A 25% plunge in Sydney and Melbourne may seem like a crash but given the extent of the prior gains it’s arguably not. But a 25% national average fall would probably be interpreted as a crash. Our assessment is that this is unlikely unless we see much higher interest rates or unemployment (neither of which are expected) driving a sharp rise in defaults and forced property sales or a collapse in immigration (which would collapse demand). Strong population growth is still driving strong underlying demand for housing. While mortgage stress is a risk, it tends to be overstated, and is unlikely to be a generalised issue unless interest rates or unemployment shoot higher. And, while Sydney and Melbourne are at risk, other cities have not seen the same boom & so are unlikely to crash.

Although many like to make comparisons to the US at the time of the GFC, there are two big differences. Australia has not seen the surge in sub-prime loans where money was lent to home owners who often had “no income, no job, no asset” (NINJA loans). Secondly, our mortgages are full recourse meaning we won’t see “jingle mail”, where home owners can send back the keys just because the house value falls below their debt, which then saw the bank put the property back on the market pushing home prices even lower.

However, the risk of a crash cannot be ignored given the danger that banks may become too tight and that investors decide to exit in the face of falling returns.

Have home prices fallen before?

What will be the impact on the economy?

The housing downturn will affect the broader economy via slowing dwelling construction, negative wealth effects on consumer spending (ie, our wealth goes down, we feel poorer, we spend less than otherwise) and if rising defaults drive a further slowing in bank lending. The first two will detract 1 to 1.5 percentage points from economic growth. Growth in infrastructure spending and business investment should help keep the economy growing but its likely to be constrained to around 2.7% which in turn will keep wages and inflation low. 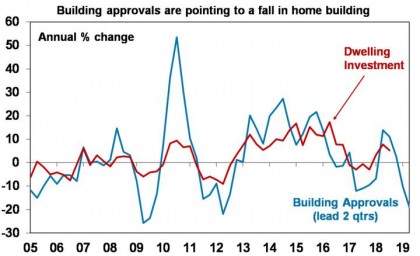 What is the impact on banks?

The main risk for banks is that the property downturn drives a rise in defaults. However, full recourse loans mean that just because home prices fall resulting in negative equity, defaults won’t necessarily rise. In the absence of much higher interest rates or unemployment making it harder for people to service their loans, a big rise in defaults is unlikely. However, it’s still a risk and the housing downturn will likely mean slower bank lending which will constrain bank profits.

What will it mean for interest rates?

Constrained growth due to the housing downturn resulting in lower for longer inflation will likely drive the RBA to cut interest rates this year, with two cuts taking the cash rate to 1% by year end. Our base case is that this will occur in August and November (giving the RBA chance to assess the election and tax cuts), but soft data could see it come earlier. Tax cuts from July are unlikely to be big enough (the Government is allowing for just $3bn pa in tax cuts which is just 0.1% of GDP) to head off the need for rate cuts.

Is the house price downturn good or bad?

This depends on who you are. For baby boomers who got in years ago, have paid off their debt and saw the value of their home rise to levels they never believed sustainable, a fall back to 2014/15 levels may be no big deal. For those who got in more recently and have a big mortgage price falls are more of a downer and its this group for whom negative wealth effects will be greatest. For millennials trying to get in its great news – assuming the housing downturn is not so great that it knocks the economy for six and they lose their jobs. For investors…

Over the very long-term, residential property adjusted for costs has similar returns to Australian shares. So, there is a role for it in investors’ portfolios. However, right now the slump in property prices in some cities is bad news for investors given that rental yields are often just 1-2% after costs. Falling rents in Sydney are a double whammy. Add to this uncertainty about tax and it’s not a great time for a property investor. That said, other cities and regional centres offer more attractive rental yields than Sydney and Melbourne and falling prices in Sydney and Melbourne will throw up opportunities at some point.