Since the global financial crisis (GFC), one of the dominant patterns in global economic policy has been the search for more tools to provide stimulus in an environment where low growth and low inflation have proven extremely persistent.

Faced with the difficulty of what to do when cash rates reach the lower bound of zero, central bankers have responded with attempts to twist the yield curve; purchases of government bonds, corporate bonds and equities; direct loans into the banking system; and most recently, negative interest rates. In some countries, these moves have been accompanied by explicit requests from the central bank that governments become more active in fiscal policy.

These non-traditional policy tools reflect a degree of desperation, as the traditional tool of monetary policy – cash rates – have reached their effective limits. When a central bank reduces interest rates, it limits its ability to provide further stimulus going forward. Given there is a lower bound on the cash rate, the decision to cut rates today means one more cut that cannot be delivered in the future, should economic conditions worsen.

In effect, by using policy flexibility today, policy makers, with a finite number of ways to deliver stimulus, reduce their future flexibility to loosen policy. Policy makers have embraced quantitative easing and negative interest rates to increase the number of policy tools available and therefore generate more flexibility for the future.

Flexibility for policy makers is essential if they are to respond to further growth downturns or systemic shocks. Additionally, in an environment where central banks are often struggling to meet their inflation mandates, a perceived inability to deliver further stimulus goes to the heart of central bank credibility itself, with low inflation expectations becoming entrenched as a result.

At AMP Capital, our belief is that a rigorous and robust investment process is the key to delivering great investor outcomes. To that end, we have developed a method of analysing economies and markets using quantitative analysis as the foundation. We are continuing that tradition by introducing our Policy Inflexibility Index, which we have developed and calculated across a range of countries. Through this Index we seek to model the degree of policy choices, available to any given country, that support growth and inflation expectations in a systematic way. The index is based on the following inputs: 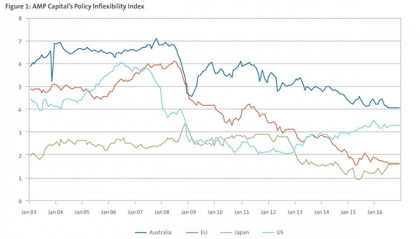 Figure 1 shows the Policy Inflexibility Indices for Australia, the EU, Japan and the United States. There are a number of notable observations:

Australia, with the highest cash rate, has not had to engage in any unconventional monetary policy and has the most favourable starting point from a fiscal point of view. Consequently, Australia has considerably more policy flexibility than the other countries. However, the extended easing cycle by the RBA has had some impact in limiting future choices for further stimulus.

The US has significantly more policy flexibility than either Europe or Japan. This is partly due to having commenced a hiking cycle. What has been more impactful in terms of future flexibility has been the substantial rise in the value of the USD; while this has a tightening impact on policy now, the rally provides scope for a more substantial decline should growth expectations falter. Additionally, the US fiscal position has substantially improved since the large deficits that were run following the collapse of Lehman Brothers, providing greater scope for additional fiscal spending in the future, if needed.

Although Europe and Japan face similar overall constraints with policy flexibility, the underlying reasons are different. Both have low cash rates and relatively flat yield curves owing to extensive asset purchase programs. However, in the case of Japan, the Yen remains more expensive against valuation models, allowing greater potential for future weakness. For Europe, the overall fiscal position of the Eurozone is somewhat more positive, allowing for further stimulus from government spending.

It remains to be seen whether new policy tools will be found. Policy makers have been remarkably inventive in finding new approaches to deliver easing in the years since the GFC. Had this index been constructed prior to that period, we would not have considered the need to factor in the potential for quantitative easing. It is likely that the index will need to be expanded in the future to handle further developments in unconventional policy.

Additionally, understanding whether a country has room to move on policy is not the same as determining whether it will choose to do so. For example:

The European fiscal situation, in aggregate, is strengthened by fiscal stance of Germany, where low deficits and debt levels act to improve the score of the Eurozone as a whole. While the index seeks to capture the capacity of policy makers to influence the cycle, it does not capture their willingness to do so. This is exemplified by the reluctance of Germany to run budget deficits, despite low growth and inflation; which has hindered the recovery of the Eurozone. Similarly, while Australia’s relative positive fiscal position allows for future stimulus, if there is a lack of political will to run larger budget deficits in an environment of deteriorating growth, the policy flexibility will remain unused. Nonetheless, the potential for further stimulus is paramount for policy makers seeking to maintain their inflation credibility.

Finally, all these measures are somewhat subjective. The true lower bound for effective cash rates is likely to be determined in hindsight. While it is likely that a currency that is expensive against fundamentals is more likely to fall, this may not occur, despite the will of policy makers.

All that said, a country that has exhausted its policy tools finds itself in a difficult position. In such a scenario, policy makers are likely to be confronted by substantial challenges in smoothing out the growth cycle and maintaining inflation expectations. It seems clear that despite policy makers’ claims, both Japan and the Eurozone are close to the limits of what can be achieved through existing methods. Assets in countries with low levels of policy flexibility should have higher risk premiums in order to compensate for increased tail risk.

Important note: While every care has been taken in the preparation of this document, AMP Capital Investors Limited (ABN 59 001 777 591, AFSL 232497) and AMP Capital Funds Management Limited (ABN 15 159 557 721, AFSL 426455) makes no representations or warranties as to the accuracy or completeness of any statement in it including, without limitation, any forecasts. Past performance is not a reliable indicator of future performance. This document has been prepared for the purpose of providing general information, without taking account of any particular investor’s objectives, financial situation or needs. An investor should, before making any investment decisions, consider the appropriateness of the information in this document, and seek professional advice, having regard to the investor’s objectives, financial situation and needs. This document is solely for the use of the party to whom it is provided. AMP Capital Funds Management Limited (AMP Capital) is the responsible entity of the AMP Capital Sustainable Australian Equity Fund and the issuer of the units in the Fund. To invest in this Fund, investors will need to obtain the current Product Disclosure Statement (PDS) from AMP Capital Investors Limited. The PDS contains important information about investing in the Fund and it is important that investors read the PDS before making a decision about whether to acquire, or continue to hold or dispose of units in the Fund. Neither AMP Capital, nor any other company in the AMP Group guarantees the repayment of capital or the performance of any product or any particular rate of return referred to in this document. Past performance is not a reliable indicator of future performance.