RBA cuts rates to a new record low – why?

As had become widely expected in the past two weeks the Reserve Bank of Australia has cut the official cash rate by 0.25% which takes it to 1.25%.

This is the first move in official interest rates since August 2016 but is the 13th rate cut in this rate cutting cycle that started back in November 2011 when rates were 4.75%. (It’s not a new rate cutting cycle as rates have not been raised since they started to fall in 2011.) This takes the cash rate to a record low 1.25% in the longest easing cycle on record. Assuming banks cut their rates by 0.25% it will take deposit rates to their lowest since the mid-1950s and headline mortgage rates to their lowest since the early 1950s, although some mortgage rates are already at record lows. 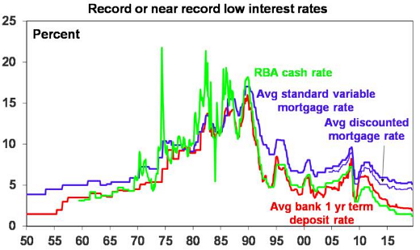 The cash rate line shows authorised dealers’ rates & 90-day bill rates up until the early 1980s. The chart assumes all rates fall 0.25% in May. Source: RBA

So what’s driven this? Will it help the economy? How low might rates go? And what does it mean for investors?

What drove the rate cut?

Put simply economic growth has slowed sharply below its long-term potential reflecting the housing downturn, but other factors from drought to the threat to global growth from the US trade wars cloud the outlook. This in turn has seen the outlook for unemployment deteriorate – at a time when there is still a high combined level of unemployed and underemployed (at 13.7% of the workforce). Which in turn threatens to keep wages growth low and inflation below the RBA’s 2-3% inflation target for even longer. Reflecting this the RBA has revised down sharply its growth and inflation forecasts over the past six months and now doesn’t see inflation rising above 2% out to 2021 even with the technical assumption of two rate cuts. The RBA has concluded that it needs much lower unemployment than the 5% or so recently seen to get inflation back to target. But recent indicators point to rising unemployment. Hence the RBA has returned to cutting the cash rate to help boost growth.

Inflation was just 1.3% over the year to the March quarter. Abstracting from volatile items, underlying inflation is just 1.4%. This reflects a combination of weak demand, high levels of spare capacity & underutilised workers, intense competition, technological innovation & softish commodity prices. The problem is that inflation has been undershooting RBA forecasts and the inflation target for some time, threatening its credibility. 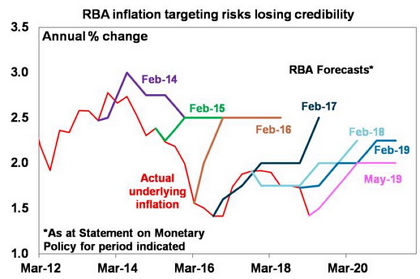 Second, there are problems with allowing too-low inflation. Statistical measures of inflation tend to overstate actual inflation by 1-2% because statisticians have trouble adjusting for quality improvements. And targeting too low an inflation rate could mean we are knocked into deflation in an economic downturn.

More simply, low inflation is synonymous with low wages growth and this is contributing to a sense of dissatisfaction in the community. Getting both up to more normal levels is desirable.

While its natural to assess the RBA in isolation it’s clear that it is being caught up in global forces. The weakness in inflation is evident globally and reflects the same drivers as in Australia. Combine this ongoing softness in inflation with the latest threat to global growth – from Trump’s trade wars – and bond yields have pushed to new record lows globally. Reflecting this Australia bond yields have also been pushed to a new record low. So, the RBA is really just ratifying global market forces! 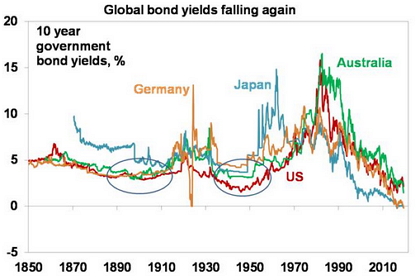 How far will the RBA cut rates?

Rate cuts are a bit like cockroaches. If you see one there is normally another nearby. We expect another 0.25% rate cut in July or August and two more rate cuts by mid next year taking the cash rate to 0.5%. We had thought 1% would mark the low and positive signs regarding residential property prices are helpful in this regard. But the flow of weak economic data and increasing risks to the global outlook with Trump’s trade wars and the slowing jobs market pointing to unemployment rising to 5.5% by year end make it hard to see just two rates cuts being enough, given that the RBA really needs to see unemployment fall to 4% or below to get inflation back to target.

But will the banks pass on RBA rate cuts?

With the recent reduction in bank funding costs meaning that last year’s 0.1-0.15% mortgage rate hikes should now be reversed and nearly 90% of bank deposits on interest rates above 0.5% (and hence able to be cut) we expect most banks to pass on all or the bulk of the RBA’s cut to customers. Short of a funding cost blow out, the interest rate structure on deposits should allow the bulk of subsequent cuts to be passed through but this may diminish as the cash rate reaches 0.5%.

Various arguments have been put up against RBA rate cuts: it should “preserve its fire power till it’s really needed”; “rate cuts haven’t helped so far so why should more cuts help”; “low rates won’t help as they cut the spending power of retirees and many of those with a mortgage just maintain their payments when rates fall”. However, looking at these in turn:

First, waiting till rate cuts are “really needed” risks leaving it too late as by then the economy will be in recession – monetary policy needs to be forward looking.

Second, rate cuts have helped the economy rebalance after the end of the mining investment boom by supporting non-mining spending. If the cash rate was still 4.75% and mortgage rates 7.5% the economy would have long ago gone into recession.

Finally, the level of household debt is more than double that of household deposits, so the household sector is a net beneficiary of lower interest rates. The responsiveness to changes in spending power for a family with a mortgage is far greater than for retirees. And, even if many with a mortgage just let their debt get paid off faster in response to falling rates this provides an offset to the negative wealth effect of the fall in house prices, reducing pressure to cut spending. And RBA rate cuts help keep the $A lower. So, while rate cuts may not be as potent with higher household debt levels and tighter lending standards, they should provide some help for households with a mortgage and for businesses that compete internationally.

Should the RBA do quantitative easing?

As the cash rate falls, we are likely to see an increasing debate around whether the RBA will use quantitative easing – ie using printed money to buy bonds to inject cash into the economy. QE is not our base – as we don’t think things are that bad – but as has been the case at other major central banks the RBA is likely to prefer exhausting cash rate cuts before considering QE and this is unlikely until it gets the cash rate down to 0.5% (beyond which lower rates will be a negative for the banks). QE is an option but to the extent that it lowers 10-year bond yields it may not help much in Australia as most household borrowing is on short term rates. It’s also debatable as to whether QE was the best approach globally. A more efficient and fairer option may be for the RBA to work with the Federal Government to provide direct financing of government spending or “cheques in the mail” to households with use by dates. This is often referred to as “helicopter money”. Such stimulus would be guaranteed to boost inflation! Hopefully, it won’t come that, and we don’t think it will but it’s an option. In the meantime, more fiscal stimulus could take some pressure off the RBA.

There are a number of implications for investors from the continuing fall in interest rates. First, low interest rates will remain in place for some time keeping bank deposit rates unattractive so it’s important for investors in bank deposits to assess alternative options. Second, the low interest rate environment means the chase for yield is likely to continue supporting commercial property, infrastructure and shares offering sustainable high dividends. Eg, the grossed-up yield on shares remains far superior to the yield on bank deposits. Investors need to consider what is most important – getting a decent income flow from their investment or absolute stability in the capital value of that investment. Of course, the equation will turn less favourable if economic growth weakens too much. 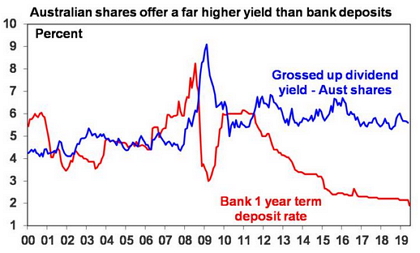 Third, the earlier than expected rate cut will likely contribute along with the election result and other recent moves to an earlier bottom in Australian house prices. However, with still high debt levels, tight lending conditions and rising unemployment it’s unlikely to set off another property boom.

Finally, RBA rate cuts will help keep the $A down in the face of already high short $A positions, strong iron ore prices and rising risks that the Fed will cut rates this year.