Review of 2016, outlook for 2017 – looking better despite the political noise

US share market analyst Joe Granville once observed that “if it’s obvious, it’s obviously wrong”. 2016 was perhaps remarkable for the things that many thought were obvious at the start of the year but did not happen: the global economy did not see plunging growth and deflation; the Fed did not blindly raise interest rates; commodity prices did not continue to crash; the Brexit vote did not plunge the world into a growth slump; the election of Donald Trump did not cause a share market crash; China did not hard land (again); Europe did not break apart; tensions in the South China Sea did not bubble over into war; and the Australian property market did not collapse. What did happen was far more mundane:

While the macro environment turned out okay – the growth scare early in the year along with political events made for a constrained and at times interesting ride in investment markets. 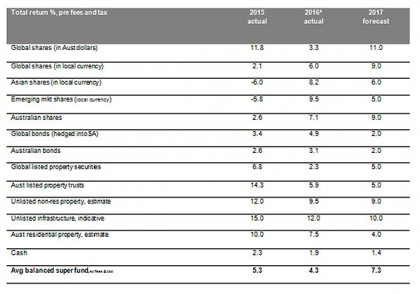 2017 – looking better despite the noise

Of course those who foresaw the “financial crisis of 2016” will just roll their call into 2017! But there are good reasons to believe disaster will yet again be averted. 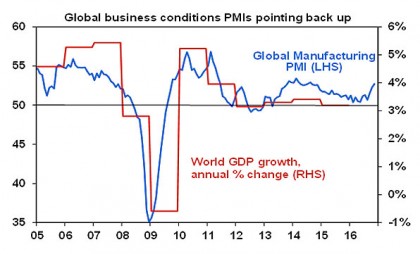 For Australia, the economy is likely to continue to rebalance away from mining investment and pick up again from its September quarter decline: the ramp up in resource export volumes has further to go; there is still a huge pipeline of housing activity yet to be completed; strengthening approvals point to stronger non-dwelling construction; the drag from mining investment is fading as it falls as a share of GDP and its likely to be close to a bottom next year; recent retail sales data have improved suggesting a consumer bounce back in the December quarter and the rebound in commodity prices tells us that the income recession in Australia is over. Expect Australian growth to be around 2.5% through 2017.

However, near term risks to Australian growth are on the downside, inflation is likely to remain below target for longer than the RBA is forecasting, the RBA is likely to need to offset increases in bank mortgage rates and the $A remains too high. So we expect another rate cut in the first half of next year taking the cash rate to 1.25%. A rate hike is a long way off.

The combination of some acceleration in global growth, rising profits and still easy money at a time when investors are highly sceptical (and ever fearful of the next GFC) should be positive for growth assets in 2017: