Seven reasons for optimism on the Australian economy

Ever since the mining boom ended several years ago it seems a sense of gloom has pervaded debate regarding Australia. There is constant talk of recession whether we don’t do something (like control the budget) or even if we do nothing (with reports titled “Australian Recession 2016 – Why it’s unavoidable and the quickest way to protect your wealth”). This sense of gloom makes me wonder whether it could be harming us – by dulling innovation, investment and a “can do” spirit. This note looks at seven reasons for optimism on Australia.

There is always something to worry about

To be sure Australia does have its problems. Unemployment at 5.7% and labour underutilisation at over 14% are too high. Housing is too expensive, the Sydney and Melbourne property markets are too hot, we are likely to see an oversupply of apartments and household debt levels are very high. The biggest boom in our history has ended, hitting investment and national income. Given this the $A is arguably still too high. Profits of listed companies fell around 7% over the last financial year. Wage growth and inflation are arguably too low for comfort. And we seem to be in perpetual political grid lock with a difficult Senate and no political ability to control the budget and undertake hard economic reforms.

But these worries are well known and have been done to death. Of course there is always something to worry about, but the endless whinging we hear in Australia leaves the impression we are in a constant state of crisis & distracts from the good news.

Seven reasons for optimism on Australia

There are in fact several reasons for optimism on Australia. 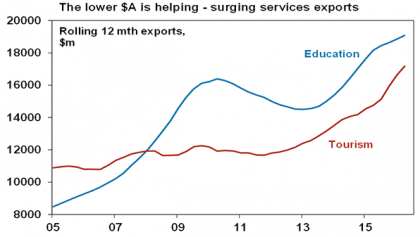 As a result of all this, post mining boom weakness in WA & NT is being offset by strength in NSW and Victoria as the much talked about two speed economy has just reversed.

State of the states, annual % change to latest

The bottom line is that the recession many said was inevitable as a result of the mining bust hasn’t happened. 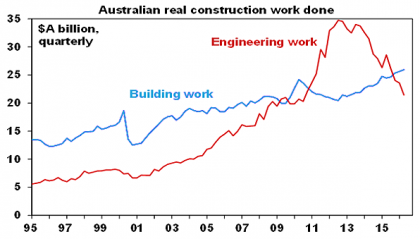 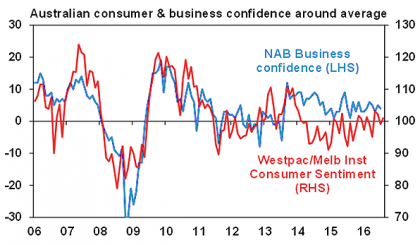 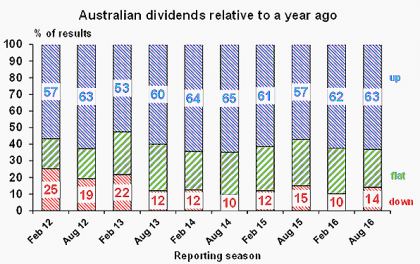 Overall profits are on track to return to growth in 2016-17 as the slump in resources profits reverses (thanks to higher commodity prices, cost and supply controls) and non-resource stocks see growth. 2016-17 earnings growth is expected to be around 8%. 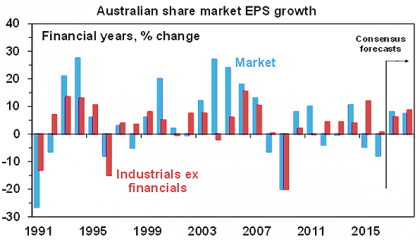 While the RBA may still need to cut rates again to help push inflation back up and keep the $A down, there is good reason for optimism regarding the overall Australian growth outlook making our call for one more rate cut a close one. Either way it’s unlikely that Australia will need zero interest rates or quantitative easing. But the key for investors is that there is reason for optimism regarding the outlook for Australian assets (Sydney and Melbourne residential property aside). Shares are due a short term correction with the next few months seeing various global event risks, but the broad trend is likely to remain up.