After a period of relative calm share markets have seen a return to volatility lately. This has gone hand in hand with a back-up in bond yields. This note looks at the main drivers and how long this period of weakness may last.

The weakness in share markets reflects a range of factors. 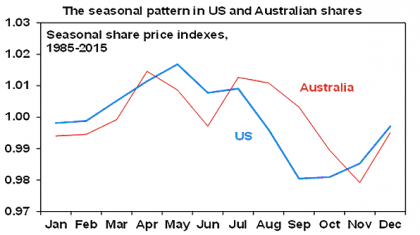 Just another correction or a renewed bear market?

Given the nature of share markets the weakness could have a way to go – once falls get underway they add to fear which creates more selling and the seasonal and risk factors mentioned above arguably have further to run. Australian shares may be down 7% from their August high, but US and global shares generally are only down 3%.

However, there are several reasons why this is likely a 5-10% correction as opposed to a resumption of the bear market that began in the June quarter last year and took many share markets – including Australian shares – down 20% or more to their lows in February this year.

Firstly, bond yields are unlikely to rise too far. The giant long term bond rally that got underway in the early 1980s is likely in the process of bottoming out – as central banks get close to the end of monetary easing, fiscal austerity gives way to fiscal stimulus and a stabilisation in commodity prices leads to lessening deflation risk. But so far the back up in bond yields while it might feel big is just a flick off the bottom looking like just another correction in the long term bond bull market. It’s hard to see a sharp back up in bond yields as global growth remains subdued and fragile, core inflation remains well below inflation targets, Fed rate hikes are likely to remain gradual, the ECB and Bank of Japan are a long way from ending stimulus or starting rate hikes, and any shift to fiscal stimulus is likely to be gradual and modest. While the Fed is likely edging towards another rate hike, recent mixed data makes a December move more likely than a September hike. Bond yields are more likely to trace out a bottoming process like we saw in the 1940s and 1950s as opposed to a sudden and sustained lurch higher. 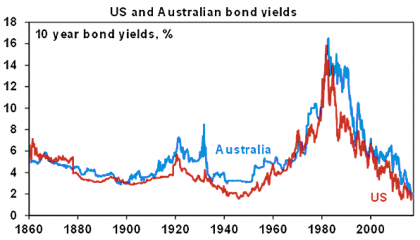 Secondly, share market valuations are not onerous for a low rate world – assuming we are right and it remains that way. While price to earnings multiples for some markets are a bit above long term averages, valuation measures that allow for low interest rates and bond yields show shares to be cheap. 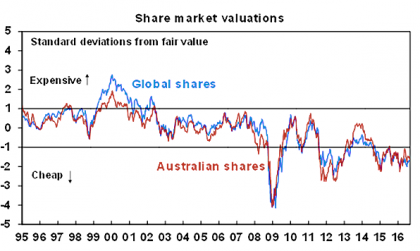 Thirdly, the global economy is continuing to muddle along and Australian growth is solid. US economic growth appears to have picked up after another soft spot early this year, Chinese economic growth appears to have stabilised just above 6.5%, global business conditions surveys (or PMIs as they are called these days) are at levels consistent with continued global growth around 3%, and are nowhere near signalling anything approaching recession (see the next chart). Australia is continuing to grow with consumer spending, housing construction, a resurgence in services like tourism and higher education exports and booming resource export volumes (the third phase of the mining boom) keeping the economy going at a time when the drags on growth from the end of the commodity price and mining investment booms are close to fading. 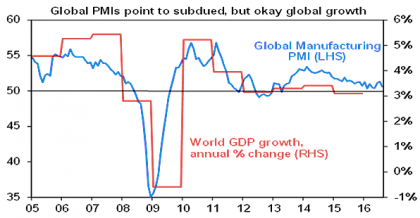 The low likelihood of a recession is very important. Ignoring the 20% fall between April 2015 and February this year, since 1900 there have been 17 bear markets in Australian shares (defined as 20% plus falls). Eleven saw shares higher a year after the initial 20% decline. The remaining 6 pushed further into bear territory with average falls over the next 12 months, after having declined by 20%, of an additional 22.5%. Credit Suisse, focussing on the period from the 1970s, called these Gummy bears and Grizzly bears respectively. 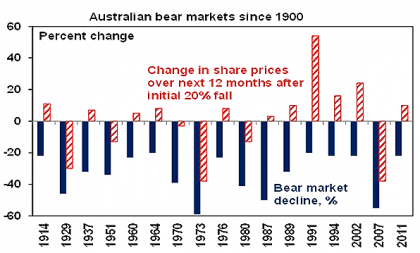 The big difference between them is whether there is recession in Australia or the US or not. Grizzly bears tend to be associated with recessions but Gummy bears tend not to be. So if recession is avoided as I think it will be then the bear market that ran from April 2015 to February this year in Australian shares is unlikely to resume and markets are more likely to remain in a rising trend.

Finally, if recession is avoided the profit outlook should continue to improve. There are some pointers to this: US earnings rose 9% in the June quarter and is likely to have bottomed as the negative impact of the fall in oil prices and the rise in the $US has abated; and Australian profits should return to growth this financial year as the impact of last year’s plunge in commodity prices – which drove resource profits down 47% – falls out.

After a strong rebound in share markets from the February lows we look to have entered a rougher patch. However, with most share markets offering reasonable value, global monetary conditions remaining easy and no sign of recession, the trend in shares is likely to remain up. But times like the present can be stressful as no one likes to see the value of their investments decline. The key for investors is to: