Should the RBA raise rates to prepare households for higher global rates?

It’s nearly two years since the Reserve Bank of Australia last changed interest rates – when it cut rates to a record low of 1.5% in August 2016. That’s a record period of inaction – or boredom for those who like to see action on rates whether it’s up or down. Of course, there are lots of views out that the RBA should be doing this or that – often held and expressed extremely – and so it’s natural that such views occasionally get an airing. This is particularly so when the RBA itself is not doing anything on the rate front.

And so it’s been this week with a former RBA Board member arguing that the RBA should raise rates by 0.25% to prepare households for higher global interest rates and that the RBA should consider ditching its inflation target in favour of targeting nominal growth.

Our view for some time is that the RBA won’t raise interest rates until 2020 at the earliest. In terms of growth, a brightening outlook for mining investment, strengthening non-mining investment, booming infrastructure spending and strong growth in export volumes are all positive but are likely to be offset by topping dwelling investment and constrained consumer spending. As a result, growth is likely to average around 2.5-3% which is below RBA expectations for growth to move up to 3.25%. This in turn means that spare capacity in the economy will remain high – notably unemployment and underemployment at 13.9% – which will keep wages growth low and inflation down. On top of this house prices likely have more downside in Sydney and Melbourne over the next two years, banks are tightening lending standards which is resulting in a defacto monetary tightening and the risks of a US-driven trade war are posing downside risks to the global growth outlook. As such we remain of the view that a rate hike is unlikely before 2020 at the earliest and can’t rule out the next move being a cut.

Raising rates to prepare for higher rates makes no sense…

Against this backdrop, raising rates just to prepare households for higher global rates would be a major policy mistake:

…nor does changing the inflation target

Suggestions to change the inflation target or move to some other target for the RBA get wheeled out every time we run above or below the target for a while but its served Australia well. When it’s above for a while like prior to the Global Financial Crisis some wanted to raise it, when it’s below for a while some want to cut it. And there are regular calls to move to something else like nominal growth targeting. But the case to change the target is poor:

The bottom line is that the RBA should stick to its inflation target and ignore those arguing for a premature rate hike. Our assessment is that this is just what it will do and that rates will be on hold for a long while yet. In the meantime, the debate about rates will no doubt rage on.

Continuing low interest rates in Australia will mean term deposit rates will stay low, search for yield activity will still help yield-sensitive unlisted investments like commercial property and infrastructure (albeit it’s waning) and an on-hold RBA with a tightening Fed is likely to mean ongoing downward pressure on the Australian dollar as the interest rate differential goes further into negative territory. 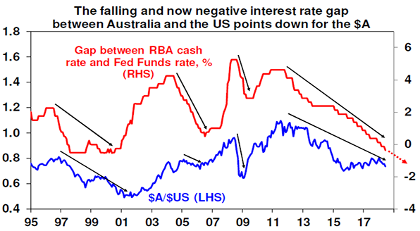