Should we worry about emerging markets?

Global share markets have taken a tumble over recent weeks, as concerns around a US-China led trade war have dominated headlines. Emerging market (EM) shares have been hit particularly hard, although this weakness in EM equities really started in March (the MSCI EM index is down by nearly 10% since the peak at the start of the year in local currency terms and by 18% in US dollar terms). The concern around EM economies has come off the back of global trade tensions but also from:

EM economic growth, share markets and currencies tends to be volatile and there have been numerous examples in recent history of worries around EM markets leading to broader share market falls (e.g. 1997/98 Asian/EM crisis and the 2015-16 China-led EM downturn). The key question for investors is: are we at that point where the downturn in EMs turns into a major bear market and drags developed market equities with it, along with global growth? In this Econosights, we look at how emerging markets are currently positioned compared to history and whether there are any red flags investors should watch for as sign of a growth deterioration across these economies.

A backdrop to emerging markets

After the Asian/EM crisis (in 1997-98), EM economies implemented various reforms to lift productivity, decrease reliance on foreign capital and float exchange rates which boosted growth in the 2000s. The industrialisation of China at the time and the subsequent surge in commodity prices provided a big boost to underlying EM performance.

Post-GFC, poor growth in advanced economies encouraged capital to flow to the stronger EMs, supporting growth in these countries. But, since 2011, EMs have come out of favour and have been underperforming developed market shares (see chart below). In 2015, EM equities faced a difficult period because of heightened concern around weakening Chinese growth (especially after the authorities devalued the currency), a recession in Brazil and Russia after the collapse in oil prices and uncertainty around interest rate hikes from the Fed and its impact on the USD. 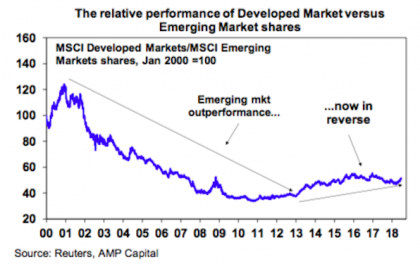 Since 2016, the cyclical global growth upswing has predominately been based in developed markets (US, Eurozone and Japan) after years of easy monetary conditions and easy liquidity which has lifted asset prices in these markets. The chart below shows the turnaround in manufacturing business conditions across developed economies, while EMs have lagged behind. EMs have still benefited from the strength in the global economy and more recently, through the reliance on global trade. 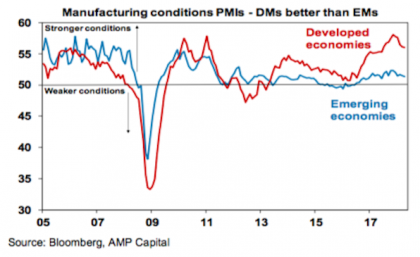 But, EMs are still more important to global growth now than compared to history. EMs make up close to 60% of world GDP (based on purchasing power parity) with a large majority of this due to China, while developed markets are now around 40% of world GDP.

We outline important indicators to watch for key EMs in the table below. We compare current conditions to 2015 (the last time EMs faced a downturn). Overall, we find that underlying EM fundamentals over the past three years have improved. GDP growth is holding up well, (which is important to ensure that debt servicing does not deteriorate) with Brazil and Russia now out of recession, current account positions have generally improved, national savings have been maintained and government budgets are under control. These indicators are important to keep monitoring, as a sign of any potential deterioration in EMs. 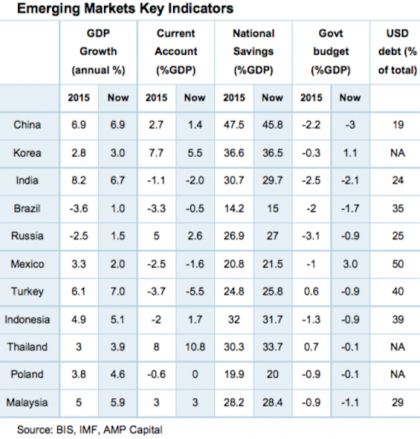 One of the key concerns around EM vulnerabilities is the stock of USD debt held by these countries. Compared to other countries (particularly advanced nations), EMs tend to borrow in foreign currency (especially in USDs because it is the global reserve currency) rather than in their domestic currencies because EM currencies tend to be more volatile given vulnerabilities to changes in capital flows. There is an inverse relationship between the USD and the cost of emerging market debt. A USD appreciation increases the local currency cost of debt, which increases the cost of debt repayment. A depreciation in the USD is beneficial for holders of USD debt, decreasing the local cost of debt repayments. The table above shows that USD debt makes up a decent chunk of emerging market external debt (all borrowings owed to offshore counterparties) and averages around 30% for these key EMs. But, holdings of USD debt are generally less than 50% of total debt outstanding, which is manageable (if the USD rises) against a backdrop of better economic fundamentals compared to a few years ago. As well, the USD appreciation is probably close to reaching a peak (particularly against EM currencies). We expect some pull back in the USD as growth outside of the US should start improving again and becoming more synchronised (which lifts other currencies).

The other negative from a rising USD is the impact on commodity prices (an appreciation in the USD is negative for commodity prices and vice versa) which hits emerging markets more than developed markets because a good chunk of EM countries are commodity exporters. Another factor to keep in mind for USD debt is the cost of borrowing from interest rates which may continue rising given higher interest rates in the US.

In the near-term, weakness in emerging market equities and currencies (as well as some potential widening in EM sovereign and corporate credit spreads) may have further to go as there remain concerns around trade wars, weakening Chinese economic growth and the increase in the USD. Some policy easing is likely from China in the near-term which would ease these concerns. Issues in individual emerging market economies are also likely to persist, as some countries grapple with capital outflows. For this reason, investors need to be selective and focus on EMs that have sound fundamentals (large current account surpluses, good GDP prospects and lower political risks) for example, Korea and Indonesia over Turkey and Brazil.

But, ultimately, we don’t expect a broad-based EM crisis in the near-term that would drag the developed world with it. The fundamentals in EM economies are still holding up well and have not deteriorated over the past few years. Holdings of USD debt (as a proportion of total debt) make up a decent chunk of debt holdings but are manageable against better economic fundamentals. As well, the USD appreciation is probably close to its top for now (particularly against EM currencies) which will ease pressure on USD debt repayments.

Author: Diana Mousina is an Economist within the Investment Strategy and Dynamic Markets team at AMP Capital. Diana’s responsibilities include providing economic and macro investment analysis and contributing to the performance of the dynamic markets fund.


Important note: While every care has been taken in the preparation of this article, AMP Capital Investors Limited (ABN 59 001 777 591, AFSL 232497) makes no representations or warranties as to the accuracy or completeness of any statement in it including, without limitation, any forecasts. Past performance is not a reliable indicator of future performance. This article has been prepared for the purpose of providing general information, without taking account of any particular investor’s objectives, financial situation or needs. An investor should, before making any investment decisions, consider the appropriateness of the information in this article, and seek professional advice, having regard to the investor’s objectives, financial situation and needs. This article is solely for the use of the party to whom it is provided and must not be provided to any other person without the express written consent of AMP Capital. © 2017 AMP Capital Investors Limited.