Published by Team Navigate Financial on May 10, 2017

The 2017-18 Budget has much to make it popular. In fact, the goodies make it almost feel like a pre-election rather than a post-election budget. The transformation from the austerity to end “the age of entitlement” of the 2014 budget to the “fairness, security and opportunity” of this Budget has been profound.1

As always, most of the key new measures were pre-announced or leaked. On the spending front, the goodies include:

This has been offset by various savings, including:

Little change to the deficit outlook

Despite a temporary boost to corporate tax revenue from a bounce in the iron ore price, extra spending and soft personal tax collections on the back of weak wages growth means the near-term budget deficit outlook is a bit worse than MYEFO and $2.3bn worse over four years compared to last year’s budget. The return to surplus has been maintained for 2020-21 and looks better at 0.4% of GDP. After a 2016-17 budget deficit of $37.6bn, the deficit for 2017-18 is forecast to be $29.4bn (1.6% of GDP).

With the Government offsetting all new spending with savings, the actual policy impact on the economy this year and next is trivial (see the red figures in the table above). However, the projected decline in the budget deficit in the years ahead means that fiscal policy will still be acting as drag on growth. 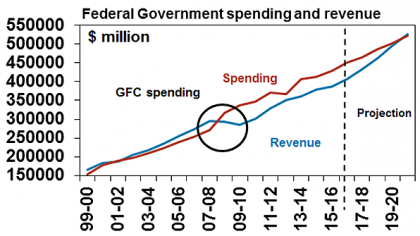 The major economic assumptions underpinning the Budget are shown in the next table. Most of the assumptions look reasonable, except that the assumption that wages growth rises to 3.75% over the next four years looks too optimistic given unemployment is not expected to fall much. The iron ore price is still expected to average $US55/tonne over the next four years. This looks reasonable albeit the recent volatility in the iron ore price highlights the uncertainty around it.

The goodies and the focus on fairness in the Budget should provide a bit of a boost to confidence and spending. But the risks around the projected return to surplus remain huge. Australia still has a budget deficit problem. Government spending surged 25% between 2006-07 and 2008-09 to combat the GFC and this has never been unwound. While our net public debt to GDP ratio is low compared to the US, Europe and Japan, comparing ourselves to a bad bunch is dangerous. The Budget is projecting a 12 year run of deficits totalling 27% of GDP which swamps the deficits of the 1980s and 1990s. And this is without the deep recessions of the early 1980s and 1990s! Rather we have achieved this thanks to a combination of ramping up spending on a whole range of things without facing up to how they will be paid for.

Unfortunately after 102 quarters without a recession there is no support for hard-nosed economic reform in Australia and this also applies to reforms to limit spending growth. So we continue to rely inordinately on assuming the best to drive revenue up. This is evident in the Budget’s projections for average revenue growth of a whopping 6.7% per annum over the next four years. Such optimistic assumptions have disappointed in recent years and the biggest risk now is that wages don’t accelerate as assumed leading to continuing poor personal tax collections.

While the Budget still projects a return to surplus by 2020-21, it remains pretty thin and the budget deficit projections over the next two years actually take us further away from a surplus not closer. The trouble is we don’t have a lot of flexibility to provide stimulus should the economy turn down. While the 2017-18 Budget should help us keep our AAA sovereign rating for now, the risk remains high that we lose it at some point. 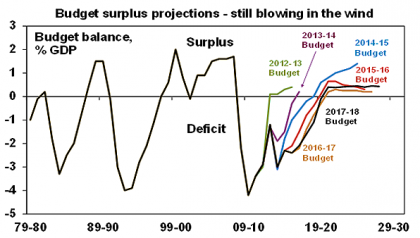 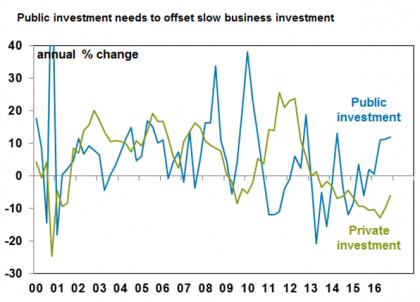 In this regard, the move to report a “net operating balance” in this year’s Budget is welcome and there is much merit in focusing debt on capital spending and not recurrent spending. But debt is still debt and there is always the risk some of the infrastructure projects turn out to be white elephants resulting in “good debt” becoming “bad”.

Finally, it’s commendable to see housing affordability being a key part of this Budget. Certainly the measures are to be welcomed, particularly those helping first home buyers, downsizers and measures to boost supply. Getting housing supply up on a sustainable basis is critical so the key is for the Federal Government to follow through with its plan to incentivise states to meet housing supply targets.

While this Budget should provide a boost to confidence (albeit not for university students), ongoing fiscal tightening will act as a mild drag on growth in the years ahead. As such, it’s hard to see major implications for the RBA. In fact recent data on trade and retail sales continues to point to more risk of a rate cut than a rate hike in Australia this year.

Bonds – a major impact on the bond market from the Budget is unlikely. With five year bond yields at 2.2%, it’s hard to see great returns from sovereign bonds over the next few years.

Shares – the potential boost to confidence from this Budget could be a small positive for the Australian share market. Overall, the Budget’s impact is unlikely to be huge. Construction stocks may be beneficiaries and banks losers.

Property – the Budget’s housing affordability measures may have an impact on home prices over time if they incentivize states to ramp up supply, but it’s likely to be marginal in the short term. We continue to expect momentum in the Sydney and Melbourne property markets to slow.

Infrastructure – the ramp up in infrastructure spending should in time provide more opportunities for private investors as many of the resultant assets are ultimately privatised.

The $A – the Budget alone is unlikely to have much impact on the $A. With the iron ore price falling back again, the interest rate differential in favour of Australia continuing to narrow and the $A still too high, the downtrend in the $A is likely to resume.

The 2017-18 Budget has a sensible focus on housing affordability and infrastructure. The main risks remain around the revenue assumptions and when we will get back to surplus.

1This note prepared with the help of Diana Mousina, Economist, AMP Capital.