The $A still has more downside, but a lot of the weakness is behind us

While some have expressed surprise at the recent resilience in the value of the Australian dollar around the $US0.69-0.70 level despite weak Australian growth and Reserve Bank rate cuts, from a big picture sense it has already fallen a long way. It’s down 37% from a multi-decade high of $US1.10 in 2011 and it’s down 15% from a high in January last year of $US0.81. So, having met our long-held expectation for a fall to around or just below $US0.70 and given its recent resilience now is an appropriate time to take a look at its outlook.

The $A is slightly undervalued long term

The first thing to note is that from a very long-term perspective the Australian dollar is around or just below fair value. This contrasts to the situation back in 2011 when it was well above long-term fair value. The best guide to this is what is called purchasing power parity (PPP) according to which exchange rates should equilibrate the price of a basket of goods and services across countries – see the next chart. 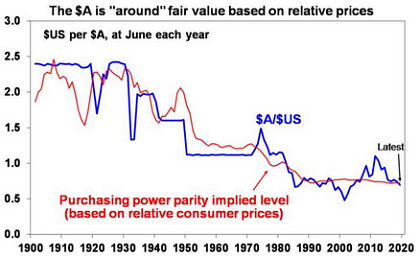 If over time Australian inflation and costs rise relative to the US, then the value of the $A should fall to maintain its real purchasing power and competitiveness. And vice versa if Australian inflation falls relative to the US. Consistent with this the Australian dollar tends to move in line with relative price differentials – or its purchasing power parity implied level – over the long term. And right now, it’s around or just below fair value.

But as can be seen in the last chart, it rarely spends much time at the purchasing power parity level. Cyclical swings in the $A are largely driven by swings in the prices of Australia's key commodity exports and relative interest rates, such that a fall in Australian rates relative to US rates makes it more attractive to park money in the US and hence pushes the $A down. “Investor” sentiment and positioning also impacts – such that if the $A is over-loved with a lot of long positions then it becomes vulnerable to a fall and vice versa if it’s under-loved.

The negatives for the $A…

For some time, our view has been that the $A would fall into the high $US0.60s and this has happened. But notwithstanding this and that the $A has already fallen a long way from its 2011 high, it could still face a bit more downside over the next six to 12 months. The main reason is that Australian growth is weaker than US growth and spare capacity is much higher in Australia. For example, labour market underutilisation is 13.7% in Australia versus just 7.1% in the US, growth in Australia is running at 1.8% year on year compared to 3.2% in the US and the drag on growth from the housing downturn is likely to keep growth relatively weak in Australia for the next year or so. 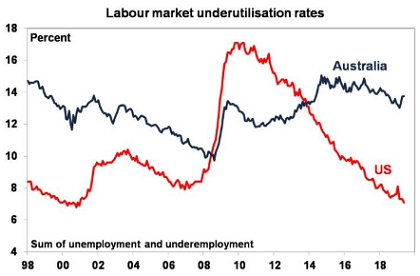 This will keep inflation lower in Australia than in the US and so we see the RBA cutting rates more than the Fed. And the RBA is much closer to having to do quantitative easing or some variant of it (ie using printed money to boost growth) than the Fed. This will continue to make it relatively less attractive to park money in Australia. As can be seen in the next chart, periods of a low and falling interest rate differential between Australia and the US usually see a low and falling $A. 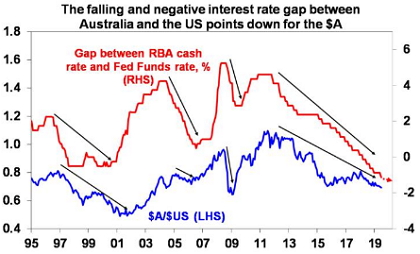 So this all points to more downside for the Australian dollar.

Against this there are a bunch of forces acting to support the $A, and this has been evident in its relative resilience despite bad news in recent weeks. Firstly, global sentiment towards the Australian dollar has been negative for some time and this has been reflected in short or underweight positions in the $A being at extreme levels – see the next chart. In other words, many of those who want to sell the $A have already done so and this leaves it vulnerable to a rally if there is any good news. 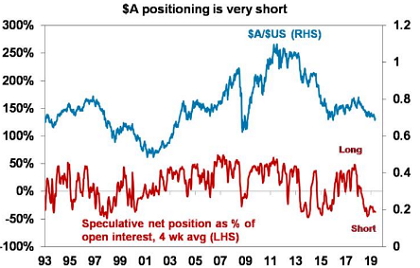 Secondly, there has been good news with the iron ore price pushing above $US100 a tonne and this combined with solid growth in export volumes has pushed the trade balance into a record surplus which has shrunk the current account deficit as a share of GDP to its lowest since the 1970s. Of course, the iron ore price will likely fall back somewhat when Vale gets production back to normal after its dam disaster, but Chinese economic stimulus may help keep it and other commodity prices supported. The smaller current account surplus means Australia has become less dependent on foreign capital inflows. 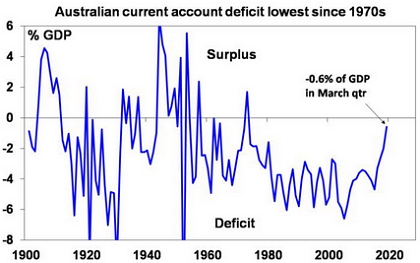 Finally, in response to the threat to growth from President Trump’s trade wars, mixed economic data and weak inflation, investors have moved to price in rate cuts from the Fed over the next year. And this is negative for the $US generally after a multi-year bull market since 2008.

So where to from here?

Overall, we expect that the weaker growth outlook in Australia relative to the US and the likely continuing decline in the interest rate differential versus the US will dominate and push the $A still lower. But with the $A having already had a big fall, short $A positions running high, the current account deficit having shrunk and the US dollar looking toppy we see the $A falling to around $US0.65 on a six to 12 month horizon as opposed to crashing down to say the 2001 low of $US0.48. Of course, if the global economy falls apart, causing a surge in unemployment in Australia as export demand and confidence collapses and another big leg down in house prices then all bets are off and the Aussie will fall a lot more…but that’s not our base case.

With the risks skewed towards more downside in the value of the $A, albeit less so than say a year ago, there are several implications for investors.

First, there remains a case – albeit not as strong as it was when the Australia dollar was much higher – to maintain a decent exposure to offshore assets that are not hedged back to Australian dollars. A decline in the value of the $A will boost the value of an investment in offshore assets denominated in foreign currency one for one. Meanwhile, the fall in Australian interest rates relative to global interest rates has reduced the incentive to hedge because when Australian rates are above global rates investors are “paid” to hedge.

Second, if the global outlook turns sour due to say Trump’s trade wars, having an exposure to foreign currency provides protection for Australian investors as the $A usually falls in response to threats to global growth. As can be seen in the next chart there is a rough positive correlation between changes in global shares in their local currency terms and the $A. Major falls in global shares associated with the emerging market/LTCM crisis in 1998, the tech wreck into 2001, the GFC, the Eurozone crises and the 2015-16 global growth scare saw sharp falls in the $A. So being short the $A and long foreign exchange provides good protection against threats to the global outlook. 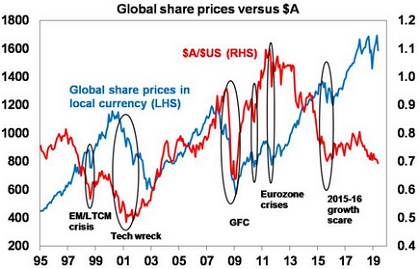 Finally, continuing softness in the $A will be positive for Australian industry sectors that compete internationally like tourism, higher education, manufacturing, agriculture and mining and this will benefit shares exposed to these areas.