The Australian economy and profits – seven reasons to be upbeat

For the last few years we have heard constant predictions of a recession in Australia as the mining boom turned to bust and a housing bust was seen to follow. Some even went so far as to say that an imminent recession was “unavoidable”. Those fears intensified after the September quarter GDP data showed the economy going backwards. But a 1.1% rebound in December quarter growth highlights that yet again it hasn’t happened. The December quarter rebound was on the back of stronger consumer spending, housing investment, business investment, public demand and export volumes. So where to from here? 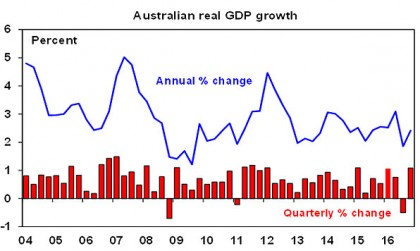 To be sure, aside from global threats, Australia has its own worry list. The key threats and constraints are as follows:

That said, most of these concerns are not new and have been discussed endlessly. Endless whinging about them is distracting from the good news.

Reasons to be upbeat on the outlook for Australia

In fact, there remains good reason to be upbeat on Australia. 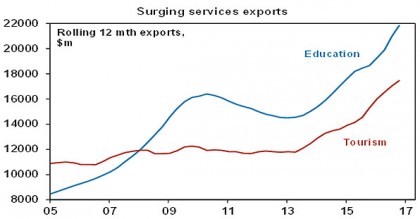 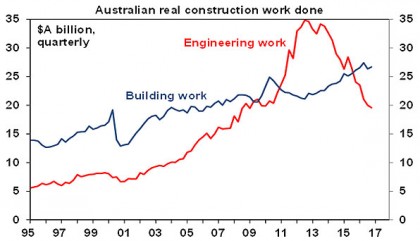 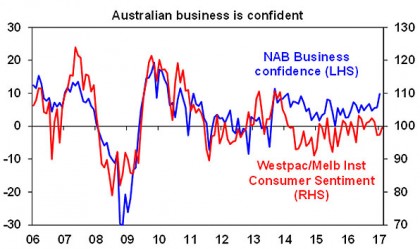 Overall, recession is likely to continue to be avoided and economic growth is likely on its way back to near 3% this year.

There remains a case for another RBA interest rate cut: the $A remains too high, slowing housing investment at a time when mining investment is still falling risks slower economic growth, banks are under pressure to raise rates out of cycle and inflation risks staying lower for longer as wages growth remains weak. But against this, growth has bounced back nicely in the December quarter, national income is up and RBA concerns about the threat to household financial stability that may flow from more rate cuts imply a high hurdle to cutting rates again. As a result we are removing the rate cut we had expected for May and now expect rates to be on hold this year. That said if the RBA is to do anything on rates this year a cut is more likely than a hike. A rate hike is unlikely until later next year.

Profit growth goes back to positive

The Australian December half profit reporting season confirmed a very strong return to profit growth. However, this dramatic turnaround has been driven by resources stocks with more modest growth for the rest of the market. In terms of some key statistics: 45% of companies results have exceeded earnings expectations which is around the long term norm, 59% of companies have seen profits up from a year ago with a median gain of 4% year on year and the focus has remained on dividends with 80% of companies either increasing or maintaining their dividends which is a positive sign of corporate confidence in the outlook.

Consensus profit expectations for the overall market for this financial year were revised up by around 2% through the reporting season to a strong 19%. The upgrade has all been driven by resources companies which are on track for a rise in profit of 150% this financial year reflecting the benefits of higher commodity prices and volumes on a tighter cost base. Profit growth across the rest of the market is likely to be around 5% with mixed bank results and constrained revenue growth for industrials. Outlook comments have generally been positive and as a result the proportion of companies seeing earnings upgrades has been greater than normal. While the bounce in resource profits will slow, profit growth for industrials is likely to pick up reflecting stronger economic growth. 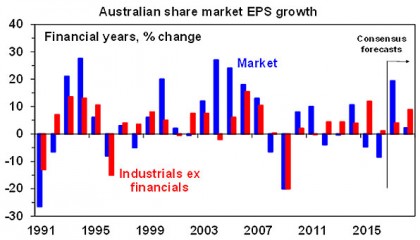 A return to reasonable growth underpinning reasonable profit growth is positive for Australian assets. With Australian shares up 12% since the US election and trading on a forward price to earnings multiple of 15.5 times which is above the long term average, the market is vulnerable to a further short term consolidation or correction. However, the improvement in profits – which is likely to broaden to industrials – should underpin a rising trend in the market on a 6-12 month horizon.