The Australian economy hits another rough patch – implications for investors

Despite numerous forecasts for an “unavoidable” recession following the end of the mining boom early this decade, the Australian economy has continued to defy the doomsters and keep growing. However, recently it seems to have hit a bit of a rough patch. After contracting in the September quarter, the economy bounced back in the December quarter only to falter again in the March quarter. While there was relief that we didn’t see another contraction, as had been feared, and the economy has now had 103 quarters without a recession, it would be wrong to get too excited. March quarter growth was just 0.3% quarter on quarter and annual growth slowed to 1.7% year on year, its slowest since the global financial crisis (GFC). 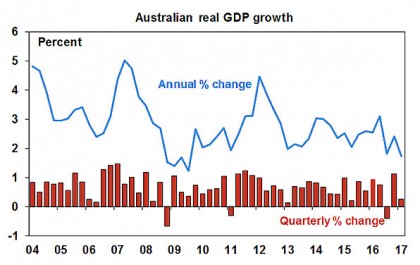 Cyclone Debbie and its aftermath disrupted housing construction & trade in the March quarter and this will pass. But before it does, the weather impact on trade will worsen in the current quarter – as indicated by a 45% collapse in coal exports in April, which is unlikely to be made up for in May and June – resulting in another quarter of poor growth. More fundamentally though: 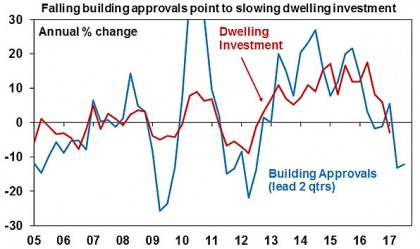 The impact of the housing cycle on the Australian economy is regularly exaggerated. Last year it contributed around 0.3% directly to GDP growth (via housing construction) and indirect effects look unlikely to have been more than another 0.3%. In other words, not a huge amount. But nevertheless it will be a drag on growth when it slows.

However, while the consumer and the housing cycle look like becoming a drag on Australian growth in the year or two ahead, several considerations will provide an offset: 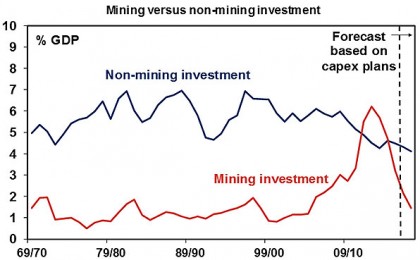 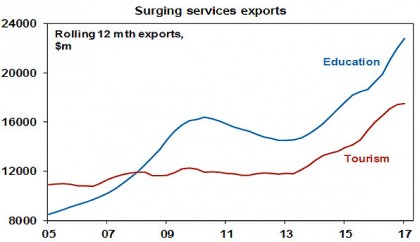 These considerations should ensure that the Australian economy continues to grow and avoids recession. However, the drag from soft consumer spending and an end to the east coast housing boom will likely leave growth stuck around 2 to 2.5%. This is below Government and RBA expectations for a return to 3%, posing downside risks to the inflation outlook.

In an ideal world and given the declining potency of monetary policy (and the fear of reigniting home prices gains), this would be the time to consider income tax cuts (or “cheques in the mail”) to help shore up consumer spending. The Government could consider financing this by dropping/delaying the cuts to corporate tax for large companies that are stalled in the Senate. However, since the corporate tax cuts were due to kick in much later, the budget deficit would still blow out in the short term and it’s doubtful the Government would want to allow this given the risk of a ratings downgrade.

As a result, the pressure to do something if growth remains sub-par and underlying inflation stays below target will fall back to the RBA. As such our view is that the chance of an interest rate hike in the next 12 months is very low and the probability of another rate cut has pushed up to around 40-50% (well above the probability implied by the money market of 11%). Yes, the RBA remains reluctant to cut rates again and showed no signs of an easing bias in its June post-meeting statement, but then again it’s been a reluctant rate cutter all the way down since 2011. Key things to watch for another rate cut are: a softening in jobs data; continued weak consumer spending; another downwards revision in RBA growth and inflation forecasts; significant cooling in the Sydney and Melbourne property markets; and the Australian dollar remaining relatively resilient.

There are two major implications for Australian based investors. First, continue to favour global over Australian shares. While US and global share indices are hitting new record highs, Australian shares remain well below their pre-GFC peak. In fact, Australian shares have been underperforming global shares since October 2009. See the next chart. This reflects relatively tighter monetary policy in Australia (the US had money printing and zero rates and Australia had neither), the commodity slump, the lagged impact of the rise in the $A above parity in 2010 and a mean reversion of the 2000 to 2009 outperformance by Australian shares. While the underperformance has reversed half of the 2000 to 2009 outperformance, it looks like it has further to go reflecting weaker growth prospects in Australia. We see the ASX 200 higher by year end, but global shares are likely to do better. 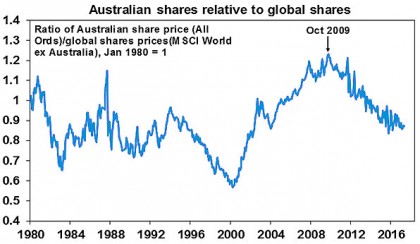 Secondly, maintain a decent exposure to foreign currency. A simple way to do this is to leave a proportion of global shares unhedged. Historically the $A has tended to fall against the $US when the level of interest rates in Australia relative to the US is falling. See the next chart. With the Fed likely to continue (gradually) raising rates and the RBA on hold or potentially cutting rates again, the risk for the $A remains down. 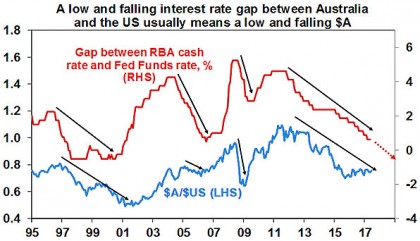