The Australian housing market – surging unit supply, the economy and what it all means for investors

Housing matters a lot in Australia. Having a house on a quarter acre block is part of the "Aussie dream". Housing is a popular investment destination. And the housing cycle is a key component of the economic cycle and closely connected to interest rate movements. But in the last 15 years or so it has taken on a darker side as a surge in house prices that started in the late 1990s has led to poor affordability and gone hand in hand with surging household debt. Reflecting this, predictions of an imminent property crash bringing down the Australian economy have been repeated ad nauseam since 2003. This note looks at the risks of a property crash, particularly given the rising supply of units, implications from the property cycle for economic growth and how investors should view it.

The big picture view on Australian residential property is well known. First, Australian housing is expensive. According to the 2016 Demographia Housing Affordability Survey the median multiple of house prices in cities over 1 million people to household income is 6.4 times in Australia versus 3.7 in the US and 4.6 in the UK. In Sydney it’s 12.2 times and in Melbourne it’s 9.7 times. The ratios of house price to incomes & rents are at the high end of OECD countries and have been since 2003. 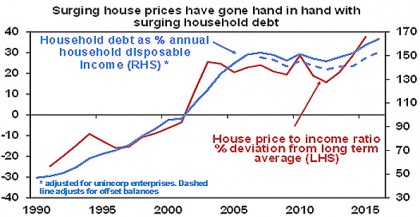 How did it come to this?

While it’s common to look for scapegoats to blame for high home prices and debt the basic driver looks to be a combination of the shift from high to low interest rates over the last 20-30 years which has boosted borrowing and buying power and the inadequacy of a supply response (thanks to tight development controls, restrictive land release and lagging infrastructure) to suppress the resultant rise in the ratio of prices to incomes. The following chart shows a cumulative shortfall of over 100,000 dwellings relative to underlying demand had built up by 2014. 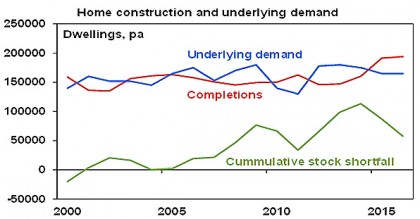 The surge in prices and debt has led many to conclude a crash is imminent. But we have heard that lots of times over the last 10-15 years. Several considerations suggest a crash is unlikely.

First, we have not seen a generalised oversupply and at the current rate we won’t go into oversupply until around 2017-18.

Second, despite talk of mortgage stress the reality is that debt interest payments relative to income are around 2004 levels.

Third, Australia has still not seen anything like the deterioration in lending standards seen in other countries prior to the GFC. In fact in recent years there has been a decline in low-doc loans and a reduction in loans with high loan to valuation ratios. 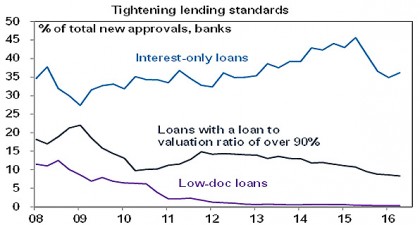 Finally, it is dangerous to generalise. While property prices have surged 60% and 40% over the last four years in Sydney and Melbourne, they have fallen in Perth to 2007 levels and have seen only moderate growth in the other capital cities.

…but the risks on the unit supply front are a concern

To see a property crash – say a 20% plus average price fall – we probably need to see one or more of the following:

However, the risks on the supply front are clearly rising in relation to apartments where approvals to build more apartments are running at more than double normal levels. 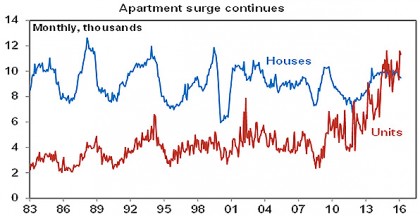 Due to the rising supply of units, vacancy rates are trending up & rents are stalling, making property investment less attractive.

Nationwide price falls are unlikely until the RBA starts to raise interest rates again and this is unlikely before 2018 at which point we are likely to see a 5% or so pullback in property prices as was seen in the 2009 & 2011 down cycles. Anything worse would likely require much higher interest rates or recession both of which are unlikely. However, it’s dangerous to generalise: 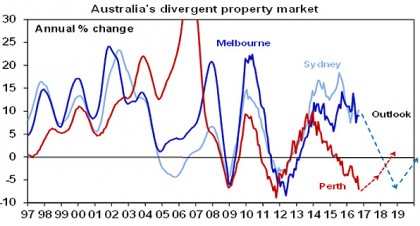 The property cycle and the economy

Slowing momentum in building approvals points to a slowdown in the dwelling construction cycle ahead. While this might be delayed into 2017 as the huge pipeline of work yet to be done is worked through, slowing dwelling investment combined with a slowing wealth affect from rising home prices mean that contribution to growth from the housing sector is likely to slow. However, as this is likely to coincide with a fading in the detraction from growth due to falling mining investment and commodity prices it’s unlikely to drive a slowing in the economy.

However, a likely decline in rents (as the supply of units hits) will constraint inflation helping keep interest rates low for longer. 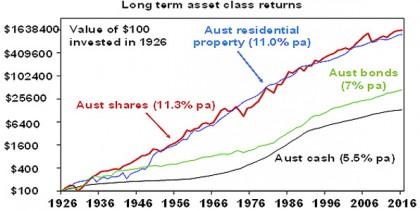