The break higher in the Australian dollar is likely to be limited – this is not 2007 all over again!

Contrary to our expectations, the Australian dollar has recently broken out of the $US0.72 to $US0.78 range of the last 15 months or so on the upside and spiked above $US0.80, its highest in over two years. So what gives? Why has the $A broken higher? Is it an Australian dollar or US dollar story? What will be the impact on the economy?  Is it on its way to parity again or will the downtrend resume?

Drivers of the recent rebound

Domestic considerations for the Australian dollar have recently been contradictory. While readings for employment, business confidence and retail sales have been solid and the minutes from the Reserve Bank of Australia’s (RBA) last board meeting were seen by many as hawkish, consumer confidence remains weak, June quarter inflation data was soft and the RBA has sought to push back against expectations for higher interest rates and in fact indicated that a lower $A “would be helpful”.

Rather there have been three main drivers of the recent break higher in Australian dollar: weakness in the US dollar; a rebound in commodity prices including in the iron ore price; and technical conditions, which have seen the break of the top of the $US0.72-0.78 range attracting more buying into the $A so that the rally has taken on a bit of a life of its own.

The US dollar goes from up to down

But the big one in here has been the downwards reversal in the US dollar that we have seen this year. While the $A is up 10% against the $US so far this year, the Euro is up 12% and the $US is down 9% against a basket of currencies. At the end of 2016, there was an expectation that President Trump’s tax and infrastructure policies would deliver a boost to US growth and that this, combined with inflation around the Fed’s 2% target, would see the Fed continue its gradual process of monetary tightening and that this would all see the US dollar trend higher. It’s all turned out a little bit different though:

All of this – at a time when growth in the rest of the world has proven to be a bit stronger than feared at the start of the year –has clearly weighed on the value of the US dollar. Ultimately we see the $US resuming its upswing as the US economic cycle is more advanced than in most major countries and the Fed is likely to continue monetary tightening with other countries lagging.

But returning to the Australian dollar, in a big picture sense it’s not way out of whack with long-term fair value based on relative prices or what is referred to as purchasing power parity. This can be seen in the next chart, which shows where the $A should have been over time if it had moved to equilibrate relative consumer price levels between the US and Australia. Right now, fair value on this measure is around $US0.75, so at around $US0.80 it’s hard to get too excited given that purchasing power parity is only a rough guide. 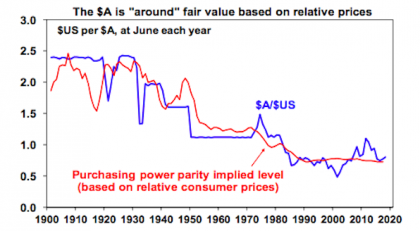 However, the environment today is very different than a decade ago when in March 2007 the $A burst through $US0.80, having recovered from a 2001 low of $US0.48, ultimately on its way towards parity (after an interruption from the Global Financial Crisis (GFC)). Back then:

Now the environment is very different: 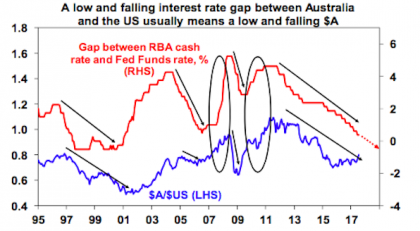 The huge difference between the Australian and US economies at present can be seen in broad measures of labour market underutilisation. In Australia, the combination of unemployment and underemployment is about as high as it ever gets, whereas in the US its nearing as low as it ever gets, which is consistent with falling interest rates in Australia relative to the US. Back in 2007, when the $A was on its way towards parity, the Australian labour market was rapidly tightening with labour market underutilisation heading to a record low. 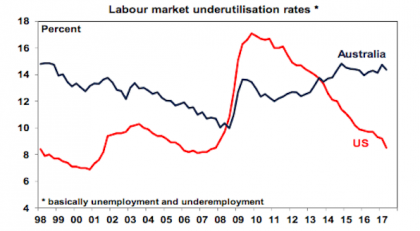 In the short term, the $A could still have more upside as the break up through key points of technical resistance could still attract more buying into it. But this is not 2007 and in fact is very different. The decade-long commodity price boom is long gone and the Australian economy is underperforming. So I remain of the view that at some point in the next year the $A will fall back – probably below $US0.70 – but trying to get a handle on when that will be and from what level is not so easy.

For investors, this means there remains a strong case to maintain a decent exposure to offshore assets that are not hedged back to Australian dollars as they will go up in value if the $A falls. This has the added advantage that if we go through another global growth scare, which will invariably weigh on the $A, it will provide a useful hedge for Australia-based investors.