The Eurozone – will they or won’t they break up? And what are the implications for investors?

The long running soap opera around whether the Eurozone will break up is now into its eighth year! In 2015 all the focus was on the latest Greek tantrum and last year the big fear was that the populist/nationalist Brexit vote and Trump victory would lead to a surge in support for populist parties across Europe and drive a Eurozone break up. There was no sign of this in Spanish and Austrian elections, but this will be put to the test again with elections this year in the Netherlands, France, Germany and maybe in Italy. The fear is that a Eurozone break up will plunge the world’s third biggest economic region into recession and financial chaos, which would adversely affect the global economy and Australia. Such a fear may be exaggerated – the UK hardly imploded after Brexit – but that’s the worry.

There are several reasons why Europe differs to the UK and US. Firstly, it doesn’t have the issues with inequality that drove the anti-establishment backlash in the US and UK. The Gini coefficient which measures income inequality is below average. 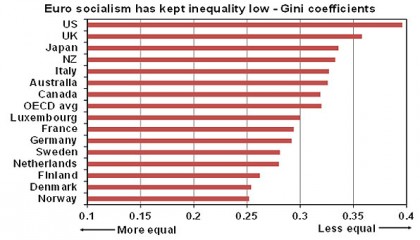 Secondly, Eurozone break up risk may have peaked with the high point of the Eurozone debt crisis – when unemployment & fiscal austerity were at their peak in 2013. But unemployment has now fallen and fiscal austerity has ended. An abatement of the migration crisis may help too with sea arrivals slowing from over 200,000 a month in October 2015 to around 5000 recently.

Thirdly, despite the media frenzy the Eurozone populist parties are not really doing any better than a few years ago (mostly anyway). See below in relation to Marine Le Pen in France.

Further, leaving the Euro is not as simple as leaving the European Union as it would entail currency redenomination, the anticipation of which would drive a likely exit of foreign investors fearful of getting paid back in depreciated currency.

Finally, support for the Euro remains high in the Eurozone at around 70%. So to attain power the populists invariably have to renounce their anti-Euro policies as Syriza did in Greece. 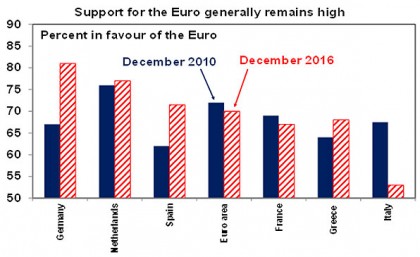 But a chain is only as strong as its weakest link and there are risks at the individual country level, to which we now turn.

There are 28 parties contesting the parliamentary elections and 14 could enter parliament. Gert Wilders’ populist Eurosceptic Freedom Party may get a greater share of the vote and more seats than any other party but support has slipped from around 20% of the vote and seats to around 17% in recent polls. It won’t be able to form government, which will ultimately come from a group of centrist parties (which have rejected working with Wilders). Support for the Euro is very high at around 77%.

The presidential election is a two round contest with the two highest placed candidates in the first round on April 23 then facing a run-off on May 7. Polling indicates that Marine Le Pen of the National Front (whose policy is to reinstate the Franc for domestic purposes, redenominate public debt into the Franc, allow the Bank of France to finance budget deficits and undertake a big round of public spending) is likely to “win” the first round (in the sense of getting more votes than anyone else with polls running around 26% support compared to around 24% for her nearest rival, Emmanuel Macron). And her chances of winning the second round have been boosted by allegations the Republican Party’s candidate Francois Fillon used public money to pay his family when he was a parliamentarian for fake work and rioting in the Paris suburb of Aulnay-sous-Bois.

However, several considerations work against a Le Pen victory in the second round. Firstly, support for Le Pen actually peaked several years ago and has since fallen back to around 26%. This suggests that the real issue is not the rise of Le Pen, but weakness in the conventional parties, ie the Socialists thanks to President Hollande and the Republican’s problems with Fillon. Le Pen also has similar allegations against her to those against Fillon, although so far this isn’t having much impact. 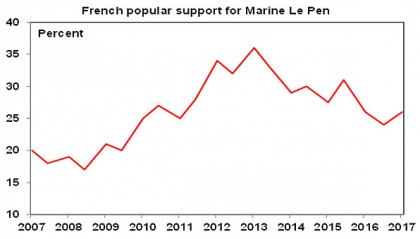 Secondly, French support for the Euro is relatively strong at 67%, whereas Le Pen advocates an exit from the Euro.

Thirdly, while Fillon is in trouble, former economy minister now running as an independent, Emmanuel Macron has been seeing increased poll support and on some recent polls has been running just ahead of Le Pen for the first round. What counts though is the final round. Polling currently shows that if the second round is between Macron and Le Pen – which looks most likely – then Macron will win by around 20 to 25%. If it’s between Fillon and Le Pen then Fillon is ahead by around 14%. And these margins are much wider than was the case in relation to opinion polls at the same point ahead of the US election when it was around 3% in favour of Clinton.

The bottom line is that current polling indicates Le Pen will not win the second round. However, France is not without risk. For example, more race related rioting in French suburbs or a major terrorist attack would play into the hands of Le Pen. The leaking of Russian hacks into Macron’s campaign may also do the same – as Russia stands to benefit from a Le Pen win.

However, even in the event of a Le Pen victory, it’s doubtful she would be able to implement her policies in relation to the Euro because her National Front is very unlikely to win a majority in the June parliamentary elections and leaving the Euro would require an act of parliament. In any case a panic in the French bond market upon a Le Pen victory (as investors fear getting paid back in devalued Francs) would likely force Le Pen to back down much as occurred with Syriza in Greece.

Finally, note that Macron (and Fillon) is pro Euro and economic reform oriented, which is just what France needs. So a Macron victory by either would be positive for France.

German Chancellor Angela Merkel is at some risk of losing to the centre-left Social Democrat Party whose new leader Martin Schulz is polling well. But while there may be a bit of market angst if Merkel is defeated, this would soon be forgotten as Schulz is more pro Europe than Merkel so even if he does win it could actually mean a stronger Eurozone as he and the SPD are likely to undertake German fiscal reflation (which could help countries like Italy). The populist Alternative for Deutschland is stuck at around 10% support, reflecting Germans’ 80% support for the Euro. So Germany is not really an issue.

Perhaps the country at greatest risk is Italy. The next election is not due to 2018, but Matteo Renzi who is still the leader of the governing Democratic Party (PD) is keen on having it earlier – possibly September – given the ongoing softness of the Italian economy. However, there is a high risk that the Eurosceptic Five State Movement (5SM) will win. Eurosceptic parties are polling in line with establishment parties in Italy, support for the Euro in Italy has fallen to around 53% and a possible split in the governing PD party will add to support for Eurosceptic parties. However, even if the 5SM “wins” in the next election and successfully forms a coalition government (it’s unlikely to win a majority in parliament) a move towards an exit from the Euro (Itexit) would likely drive a market panic leading to sharply higher Italian bond yields which in turn would adversely affect the Italian economy and most likely cause 5SM to backdown.

Greece remains a risk given the state of its economy and tough negotiations with its creditors. But there is no longer a populist Eurosceptic party for the Greeks to turn too. In fact if there were an early election the pro-Euro New Democracy party would win.

Finally, the Catalonia region of Spain looks likely to have another independence referendum around September. But for most Catalonians this seems to be more about more autonomy from Spain than actually wanting independence. Turnout is likely to be low again and without recognition from Spain (or EU support) it’s unlikely to go anywhere even if “yes” wins again.

Our base case is that the Eurozone stays together, but there are two main risks around this. Firstly, if the migration crisis ramps up again or terrorist attacks escalate which could drive broader based support for populists. Secondly, weak centrist coalition governments risk turning the populist Eurosceptics into the main opposition and leave their countries vulnerable to a populist take over the next time there is a significant economic downturn. Alternatively, if the European economy continues to recover – and gripes around immigration and EU bureaucracy are dealt with – support for the populists may decline over time.

Second, while the Eurozone economy looks stronger political risk maintains pressure on the European Central Bank to keep its quantitative easing program going out to year end, delay announcing any “tapering” in it and remain dovish. This will maintain downwards pressure on the Euro.

Finally, if we are right and the Eurozone continues to hang together then bouts of financial turmoil triggered by break-up fears are buying opportunities – just as we have seen since the Eurozone debt crisis began in 2010.