Three years after it first started raising interest rates in this cycle the Fed has increased rates for the ninth time, raising the Fed Funds rate another 0.25% to a target range of 2.25-2.5%. While this was largely anticipated by markets, the Fed was less dovish than expected and so shares sold off in response. That said it does appear that the Fed has got to a point where it can now pause or at least raise rates more slowly.

After some initial ructions after the first Fed hike in December 2015 into early 2016, markets generally were not too fussed about Fed hikes in 2016 and 2017 as tightening was “gradual” and we were only going from very easy monetary policy to less easy. However, this year markets have become fearful that the Fed will go too far and push the US into recession. In fact, fears about the Fed were the main initial trigger for falls in shares back in February and more recently since October. Of course, lately they have combined with worries around trade, US technology stocks, slowing growth indicators globally, worries around President Trump and the Mueller inquiry and US politics to accentuate share market falls. This has all combined to push global shares down 14% from their September high and Australian shares down 13% from their August high.

The Fed blinks, but not enough yet

In raising the target range for the Fed Funds rate by another 0.25%, the Fed remains upbeat on the outlook for the US economy and noted the continuing strength in the US labour market and solid growth. However, it has added the word “some” in reference to “further gradual” increases in interest rates going forward. It has also indicated it’s monitoring global economic and financial developments. And it has lowered the “dot plot” median of Fed meeting participants interest rate expectations from three hikes next year to two – albeit it’s still above market expectations – and edged down the long run estimate for the Fed Funds rate to 2.75%. While it’s not enough to satisfy share markets just yet, the Fed is moving dovish. 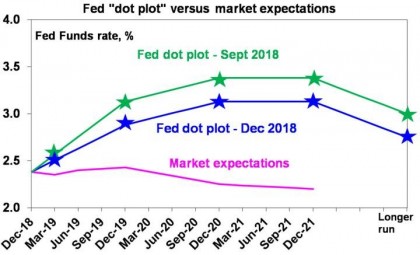 Basically, with the Fed Funds rate getting close to neutral, US core inflation stabilising around the 2% target, interest sensitive sectors like housing and autos slowing and various headwinds to the US economy next year the Fed can afford to pause or at least go more slowly in raising interest rates. Our base case is that the Fed will hold the Fed Funds rate flat during the first half of next year and only raise rates once in the second half. So, to the extent that fear of the Fed has been a big factor driving share markets lower and volatility up this year, a more cautious Fed next year should help start to allay the fears around it.

It could be a gummy, but is still unlikely to be a grizzly

As I have pointed out in recent notes, there are three types of significant share market falls:

Grizzly bears maul investors but gummy bears leave a nicer taste. Corrections are quite normal and healthy as they enable the sharemarket to let off steam. Excluding the present episode since 2012 there have been four corrections and one gummy bear market (2015-16) in global and Australian shares. Bear markets generally are a lot less common, but what we saw in 2015-16 was a gummy bear market. 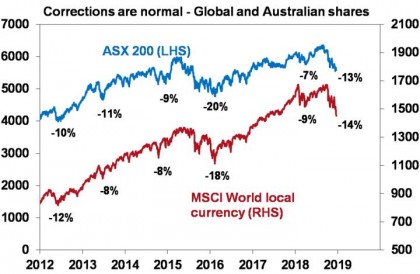 With uncertainty around trade, global growth and President Trump remaining high shares could still have more downside into early next year, particularly after having broken below their October/November lows. In other words the further break down in share markets seen in December may be signalling a shift from a simple correction to a gummy bear market. However, our view remains that a grizzly bear market is unlikely because a US, global or Australian recession is not imminent. Put simply: 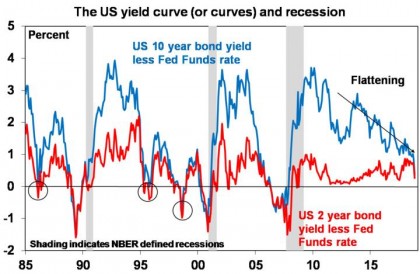 A more dovish Fed, the US and China starting to work through their differences on trade and the positive impact of the 40% fall in oil prices since their October high (which is bad for energy producers but takes pressure off inflation and helps boost consumer spending) add to confidence that we are not heading towards a US/global recession. Which in turn would mean we are not heading into a grizzly bear market.

However, our expected road map for share looks like this: shares possibly have more downside into early next year into a gummy bear market (hopefully at least after a Santa rally!) as global growth indicators remain softish in the near term. This in turn is likely to prompt more stimulus in China, the ECB to provide more cheap bank funding and a bit of fiscal stimulus out of Europe (was Macron’s concession to the “yellow shirts” a sign of things to come for fiscal stimulus in Europe?) at a time when the Fed pauses. This combines with signs that US/China trade negotiations are making make progress. Shares then bottom around March. Economic data starts to improve, and it looks like 2015-16 all over again (albeit a bit more compressed in time). In this context a further leg down in shares turning the correction we have seen so far into a “gummy bear” market (down 20% or so from top to bottom but up a year later) is a high risk. But a grizzly bear market is unlikely.

What should investors do?

Of course, sharp market falls are stressful for investors as no one likes to see their wealth decline. I don’t have a perfect crystal ball so from the point of sensible long-term investing the following points are worth bearing in mind.

First, periodic sharp setbacks in share markets are healthy and normal. Shares literally climb a wall of worry over many years with numerous periodic setbacks, but with the long-term trend providing higher returns than other more stable assets.

Second, selling shares or switching to a more conservative strategy after a major fall just locks in a loss. The best way to guard against selling on the basis of emotion is to adopt a well thought out, long-term investment strategy and stick to it.

Third, when shares and growth assets fall they are cheaper and offer higher long-term return prospects. So, the key is to look for opportunities that pullbacks provide.

Fourth, while shares may have fallen in value the dividends from the market haven’t. So, the income flow you are receiving from a well-diversified portfolio of shares remains attractive.

Fifth, shares often bottom at the point of maximum bearishness. So, when everyone is warning of disaster it’s often time to buy.