The Fed hikes again, still gradual but likely to be a bit faster next year – implications

Two years after it first started raising interest rates in this cycle in December 2015, the Fed has increased rates for the fifth time, raising the Fed Funds rate another 0.25% to a target range of 1.25-1.5%. For the last two years, it has been right not to fear the Fed as tightening was conditional on better economic conditions, it would be gradual and we were only moving from very easy monetary policy to less easy. Despite a few ructions after the first move into early last year, this has been correct as the US and global recovery has accelerated and share markets and other growth assets have performed well. The question now is where to from here? Will the Fed get more aggressive? Should investors be more concerned?

In raising the target range for the Fed Funds rate by another 0.25%, the Fed noted the continuing strengthening in the US labour market and solid growth and continues to expect inflation to pick up towards its 2% target. The Fed continues to refer to only “gradual” increases in interest rates going forward and the Fed’s so-called “dot plot” median of Fed meeting participants’ interest rate expectations is continuing to allow for three hikes in 2018 (the same as flagged in the September meeting). Quite clearly the Fed is confident that growth will remain strong with tax cuts providing an additional stimulus – it revised up its 2018 growth forecast from 2.1% to 2.5% – and that this will start pushing inflation back towards the 2% target.

The transition to new leadership at the Fed in March from Janet Yellen to Jerome Powell (assuming he is confirmed by the Senate, which is most likely) isn’t expected to signal a big change at the Fed on monetary policy. Powell is likely to follow the broad path the Fed is already on in terms of rates hikes and quantitative tightening. There may be a more relaxed approach to regulation, though, but for now that’s a separate issue.

Market expectations for just two Fed rates in 2018 hikes remain below the Fed’s dot plot signal of three hikes. While the market has been right in expecting lower interest rates than the Fed has been signalling in recent years, it wrongly underestimated the Fed in 2017 and is likely to do so again 2018. I suspect that the risks for US inflation are now swinging to the upside with spare capacity in the US economy gradually diminishing. So just as the market proved too cautious in allowing for just two Fed hikes this year when it has actually done three, we suspect it will be surprised again next year. In fact, given our views of a pick-up in inflation risks, we are allowing for four rate hikes next year in 2018 (conditional on tax reform being passed). 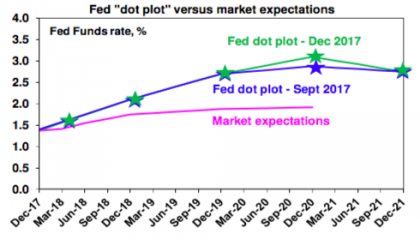 Will the Fed start to become a problem for markets?

It’s still too early to get too concerned about the Fed. 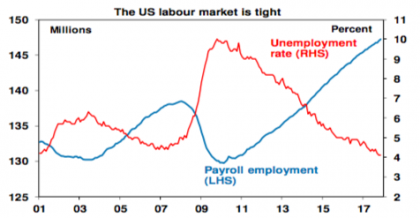 However, we are now two years into tightening and the Fed might cause a few gyrations in the year ahead.

So while we are not particularly concerned about the Fed, there is a case to be a bit more cautious regarding it than was the case over the last two years.

To the extent that the Fed’s further interest rate hike signals ongoing strength in the US, it’s good for Australia. It doesn’t signal that the RBA will soon follow and hike soon, though. Recent experience with the RBA hiking in 2009-10 (despite the Fed on hold at zero) and the RBA cutting in 2016 (when the Fed was hiking) highlights there is no automatic link. With the Australian economy remaining weaker relative to its potential than the US, risks around the Australian consumer, inflation running below target and Sydney and Melbourne house prices cooling, we remain of the view that the RBA will be on hold through much of next year and won’t raise rates till year end.

The main relevance of ongoing US monetary tightening is that it will serve to keep the $A down, notwithstanding the risks of a short term bounce higher in the $A. With the RBA on hold and the Fed set to continue raising rates, by March next year the Fed Funds rate will likely exceed the RBA’s cash rate with the interest rate differential set to further deteriorate against Australia through next year. If history is any guide, this is likely to see downwards pressure on the $A. We see the $A falling to around $US0.70 by end 2018 after its surprise strength in 2017. 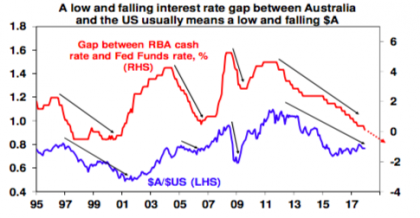