The “gradually” maturing investment cycle – what is the risk of a US recession?

The period since the Global Financial Crisis (GFC) has seemed unusual in the sense that periodic crises and post GFC caution prevented the global economy from overheating and excesses building, in turn preventing the return of the conventional economic cycle. Many of course concluded this was permanent and that inflation would never rise again (with talk of structural stagnation, the Amazon effect, etc). However, it’s becoming increasingly clear the global economy is moving out of its post GFC funk – with growth picking up and signs that inflation will too (led by the US) – and arguably returning to a more normal investment cycle. The pullback in shares and surge in volatility seen this month likely indicates an adjustment in investor expectations to reflect this. This note looks at what to watch.

The long and strong US bull market

Next month, the cyclical bull market in US shares that started in March 2009 will be nine years old. See the next table. 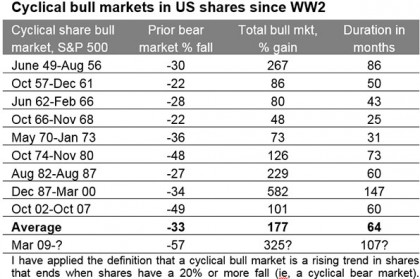 This makes it the second longest since World War Two and the second strongest in terms of gain. And according to the US National Bureau of Economic Research the current US economic expansion is now 104 months old and compares to an average expansion of 58 months since 1945. This naturally begs the question whether recession is around the corner leaving the US and hence global shares vulnerable to a major bear market?

The investment cycle is maturing

The next chart is a stylised version of the investment cycle – the thick grey line is the economic cycle. 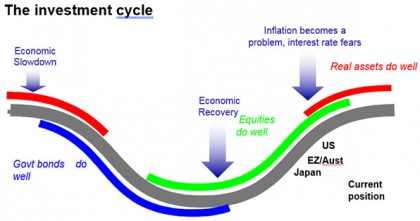 A typical cyclical bull market in shares has three phases: scepticism – when economic conditions are weak and confidence is poor, but smart investors see value in shares helped by ultra-easy monetary conditions; optimism or the “sweet spot” – when profits and growth strengthen and investor scepticism gives way to optimism while monetary policy is still easy; euphoria – when investors become euphoric on strong economic and profit conditions, which pushes shares into clear overvalued territory and excesses appear, forcing  central banks to become tight triggering an economic downturn, which combines with overvaluation and investors being fully invested to drive a new bear market.

Typically, the bull phase lasts five years. However, “bull markets do not die of old age but of exhaustion” – their length depends on how quickly recovery proceeds, excess builds up, inflation rises and extremes of overvaluation and investor euphoria appear.

This process has taken longer than normal following the GFC because periodic crises or aftershocks from the GFC – eg, the 2010-2012 Eurozone sovereign debt crisis and the 2015-16 global growth scare both of which were associated with mini bear markets globally and 19% and 14% falls in US shares respectively. This combined with post GFC consumer and business caution have prevented the global economy from overheating and excesses building and share markets going into euphoria, that then sets the scene for the next major bear market. 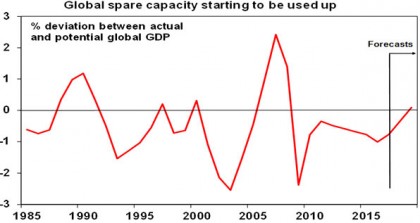 Fiscal austerity has given way to fiscal stimulus – at least in the US (with tax cuts and the removal of spending caps) – which with a lag will further boost growth. Inflationary pressures are building in the US – which is further advanced in the economic cycle than Europe, Australia and Japan (see the first chart) –  with a tight labour market, rising wages growth and accelerating import prices (flowing from the falling $US) and producer price inflation. 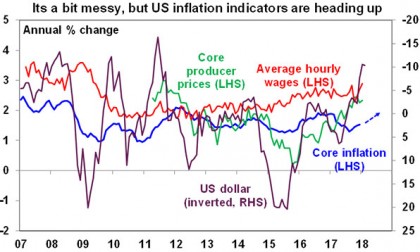 Not at the top yet

But it’s unlikely we are at the top just yet.  Historically 10% or so share market pull backs (like the one two weeks ago) are normal. But whether the US is about to enter recession is critical to whether the US (and hence global) bull market in shares is about to end. Looking at all 10% or greater falls in US shares since the 1970s (see the table in Correction time for shares?) share market falls associated with recession tend to be longer lasting with an average duration of 16 months as opposed to 9 months for all 10% plus falls and deeper with an average decline of 36% compared to an average of 17% for all 10% plus falls.
So whether a recession is imminent or not in the US is critically important in terms of whether we will see a major bear market or not. In fact, the same applies to Australian shares.
Our assessment is that a recession is not imminent in the US or globally (or in Australia – a separate issue).  First, the post-GFC hangover has only just faded with high levels of confidence helping drive stronger investment and consumer spending.
Second, as a result we are yet to see the sort of excesses that normally come with such confidence and precede recessions: 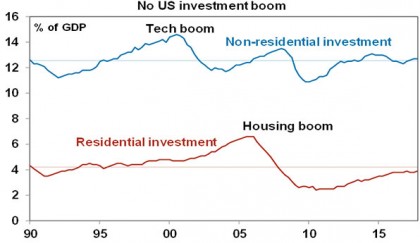 
Third, while tax cuts and additional public spending following the relaxation of spending caps will boost US growth they will take time to flow through and cause the economy to overheat.
Fourth, monetary policy is not tight globally, even in the US where the Fed has been tightening for two years: the Fed Funds rate is below nominal GDP growth – which is a sign of lose monetary policy; and the yield curve (or the gap between long term bond yields and short-term interest rates), which has always gone negative ahead of past recessions, is still positive. 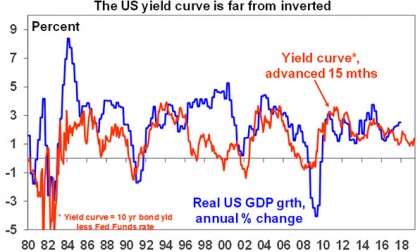 Given this our judgement is that a recession is still some time away as it will take time for excesses to build and US monetary policy to become tight such that it threatens growth. Our best guess is that it’s a late 2019/2020 risk. In the interim share market volatility is likely to increase as inflation risks and other excesses gradually build, but the bull market still has some way to go.

The key to watch for the next big bear market is for signs of excess – eg, overinvestment in key areas, rapidly-rising inflation over and above central bank targets, tight monetary policy, clear overvaluation and investor euphoria. This would then set the scene for the next economic downswing and hence a more severe bear market (as opposed to a correction or short-term bear market like we saw in 2015-16).

More volatility should be anticipated, and the fickleness of investor confidence means we can’t rule out another crash like in 1987. But despite this we still appear to be a fair way from the peak in the investment cycle so the trend in share markets likely remains up. Non-US shares and economies are less advanced in their cycles and provide opportunities for investors.