The rising demand of energy is presenting investment opportunities

World energy demand is expected to grow at an annual rate of 1% over the next 25 years. While renewable energy use will continue to grow, fossil fuels will remain the principal energy source. However, natural gas is the fastest growing fossil fuel and coal will continue to lose market share. This represents a significant opportunity for capital expenditure in energy infrastructure as the break-even price of shale oil continues to decline.

Demand for energy is linked to population size and a country’s stage of economic development. Economic growth leads to an increase in living standards and demand for household necessities which drive the increase in energy use. The world population reached 7.6 billion in 2017. China and India remain the two largest countries in the world with a population of 1.4 billion and 1.3 billion, respectively.
The world population is expected to grow by approximately 1% per year, adding 1.6 billion people over the next 23 years and reaching 9.2 billion by 2040. Most of this growth is expected to occur in African countries, with strong additions also in India, Pakistan, Indonesia, and the United States.

World GDP is expected to grow at an annual rate of approximately 3%, approaching US$150 trillion in 2040 and doubling over the next 25 years. Asia Pacific, including China and India, will account for almost half of the increase (US$37 trillion), followed by North America (US$15 trillion) and Europe (US$11 trillion).

Notwithstanding its robust population growth, Africa is expected to face a limited increase in GDP per capita and therefore to account for only around 5% of the increase in world GDP, but showing the highest compound annual growth rate (CAGR) of 4%.

The continued rise of natural gas

The energy mix has been evolving over recent years. Fossil fuels (oil, natural gas and coal) have been the main source of energy, representing a stable 86% share of the overall energy mix. Oil consumption increased in absolute terms during the 2000-15 period, however its share of the energy mix declined by 5.8% from 38.6% in 2000 to 32.8% in 2015. This decline was offset by an increase in coal, mainly due to increased electricity generation in China. 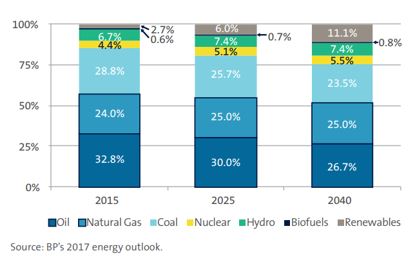 Nuclear power generation has been stable and its share of the energy mix has declined from 6.2% in 2000 to 4.4% in 2015. Renewables, mainly wind, experienced significant growth in the 2000-15 period, increasing their share from 0.5% to 2.7% of global energy use. The energy mix will continue to evolve in the future. Although fossil fuels remain the main source of energy in the global economy, their share of the global energy mix is expected to decline materially in the future. In absolute terms, oil, natural gas and coal will experience annual growth rates of 0.4%, 1.4% and 0.4%, respectively, during the 2015-40 period.

Natural gas will be the fastest growing fossil fuel with an increasing share of the overall energy mix (from 24.0% in 2015 to 25.0% in 2040), driven by a vast North American shale gas resource base. Meanwhile oil and coal will continue to lose market share falling to 26.7% and 23.5% by 2040, respectively. The declining 2000-15 trend of oil use is expected to continue and coal will be impacted by continued coal-to-gas switching. Fossil fuels’ share of overall global energy use is expected to fall to 75.2% in 2040 from 85.6% in 2015. Renewables will continue to play an increasingly important role in the power generation mix in the future, with their share of the energy mix rising to 11% in 2040.

Oil and gas development activity has been evolving significantly since producers outside of OPEC started to use fracking technology to exploit the vast resource potential in North America.

Technological developments in natural gas are expected to boost production from shale gas and associated gas from shale oil projects. Demand from industrial and electric power markets are expected to drive consumption of US natural gas at an annual growth rate of 0.6% over the next 25 years. However, production is expected to grow much faster (at an annual rate of 1.5%) resulting in an annual surplus of almost 6tcf (trillion cubic feet of natural gas) by 2040, as the US is expected to produce 38tcf and consume 32tcf annually. This amount will be exported through pipelines (e.g. 1.4tcf to Mexico in 2040) and liquefied natural gas (LNG) export terminals (4.4tcf in 2040). Most LNG is currently traded globally under oil price-linked contracts, but LNG produced in the US has the key advantage that domestic prices are less sensitive to global oil prices, which may change pricing dynamics in the future.

Investment opportunity in oil and natural gas storage and transportation

Monopolistic companies that own large and diversified networks offering attractive yields and growth opportunities from future projects represent compelling investment opportunities. Investors should aim to avoid businesses that are highly sensitive to volatility in volumes and/or commodity prices. They should look to identify companies that demonstrate:

Such an investment framework enables investors to capture long-term value in the energy infrastructure sector while avoiding short-term volatility in the commodity environment. North American energy infrastructure companies are today uniquely positioned to take advantage of the compelling long-term trends that are currently unfolding in the oil and natural gas supply industries.