The US Federal Reserve provided few surprises following its September meeting. While it left interest rates on hold, it confirmed that it will begin what it calls “balance sheet normalisation” next month and continued to signal its expectation that it will raise interest rates again in December and in the years ahead. While projected interest rates increases were lowered slightly for 2019, the Fed was more confident in another rate hike this year than markets had expected. So while US shares were little changed overnight, bond yields and the US dollar rose slightly.

Only a few years ago, there was talk of “QE forever” and how “the Fed will never be able to unwind it”!  Quantitative easing was never optimal to help recover from the Global Financial Crisis but after further fiscal policy stimulus was ruled out it was all the US had. And it worked. So now it’s time to start reversing it.

The Fed remains upbeat on the economic outlook continuing to see inflation heading back to its 2% target and seeing the negative impact on growth from recent hurricanes as temporary. It made only minor changes to its economic forecasts and sees the near-term risks to the outlook as balanced.

The start to balance sheet reduction – or what is likely to become known as “quantitative tightening” (or QT) – was well flagged earlier this year and the Fed will follow the plan it laid out at its June meeting. The Fed’s balance sheet was boosted by the government bonds and mortgage-backed securities it purchased during its post GFC related quantitative easing programs. It reached around $US4.5 trillion when the Fed ended QE back in October 2014 and has been maintained at this level ever since as the Fed has been reinvesting (or rolling over) bonds as they mature. Going forward, the Fed will reduce its balance sheet not by selling bonds, but by slowing the reinvestment of maturing bonds. This will start at a maximum cap of $US6 billion a month for Treasury bonds and $US4 billion a month for mortgage-backed securities in the December quarter increasing over 12 months until it reaches $US30bn a month for Treasury bonds and $US20 billion a month for mortgage-backed securities in December quarter 2018 at which point it will continue until the balance sheet falls to no more than the level the Fed deems necessary to implement monetary policy (thought to be around $US2-3 trillion). At this rate, the Fed’s balance sheet will have fallen below $US3 trillion by early next decade. 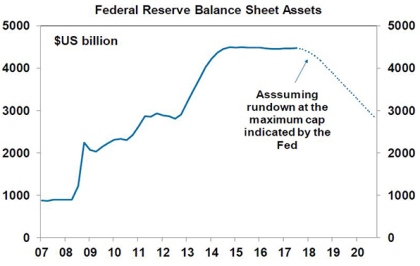 While this is not quite as radical as actually selling bonds, it is likely to result in some upwards pressure on bond yields over time (all other things being equal) as the Fed will be reducing its holdings of them. Note that since QE first started in second half 2008 to now, US bond yields have fallen from around 4% to 2.27% at present (having hit a low last year of 1.4%). Of course other factors helped drive this but Fed bond buying no doubt played a role. Looking forward then, it’s likely that some upwards pressure on bond yields is likely to result from the Fed running down its bond holdings albeit this will be at a slower rate (capped at $US50 billion a month) from late next year than the bond buying that occurred under the final round of quantitative easing (QE3), which ran at $US85 billion a month.

The Fed has indicated that the balance sheet reduction could be stopped if there is a material deterioration in the economic outlook, so as with interest rate hikes the Fed will not be on auto-pilot.

On interest rates, the Fed’s so called median dot plot of (Fed committee members’) interest rate expectations continues to point to one more rate hike this year, which is likely to occur in December and the Fed still sees three more hikes in 2018. However, the expectation for 2019 was lowered from three hikes to two and the Fed lowered its longer run Fed Funds rate estimate to 2.75% from 3%. Again, the Fed continues to stress that increases in the Fed Funds rate will be “gradual” and conditional on economic data.

While the Fed’s dot plot has been lowered for 2019, market expectations for US interest rates remain well below the Fed’s. This is understandable to some degree given the ongoing lack of significant inflation pressures and past experience. However, the Fed is reasonable in our view to assume that the tight US labour market will flow through to faster wages growth and inflation at some point. 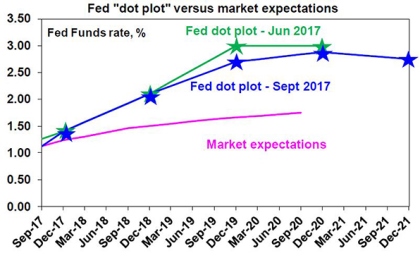 Our view is that the Fed will on balance hike rates again in December assuming inflation picks up a bit from here, and that the subsequent path of rate hikes will be closer to the Fed’s dot plot than the market is assuming. The process will still remain very gradual, though, compared to the rate hike at every meeting that was seen during the last tightening cycle mid last decade, which ultimately saw 17 rate hikes in just over two years.

There are several implications for investors from the Fed's move to start quantitative tightening at the same time that it’s in the process of gradually raising rates.

First, expect lower returns from bonds as bond yields are likely resuming their gradual rising trend. Just as US quantitative easing over 2008 to 2014 helped boost US and global bond returns it’s hard to see its unwinding with quantitative tightening being positive for them too – all other things being equal.

Second, shares should be able to withstand the latest leg in Fed tightening just as they have since the end of QE in 2014 and the four rate hikes the Fed has undertaken since: shares are still cheap relative to bonds; the Fed is only tightening because growth is strong and this means higher profits; and Fed monetary policy is a long way from being tight to the extent that it will threaten US or global growth – QT is just beginning and the Fed Funds rate is only 1-1.25%.

Third, within share markets, bond-sensitive yield trades like listed property and listed infrastructure are likely to be relative underperformers but cyclical sectors geared to higher earnings are likely to be outperformers.

Fourth, the ongoing monetary tightening in the US with gradually rising official interest rates and now a gradual reduction in the supply of US dollars through quantitative tightening should help boost the US dollar after its fall so far this year at a time when sentiment toward it is poor.

Finally, this in turn should help reduce the rising pressure on the value of the Australian dollar, which in turn should be welcome news for the Reserve Bank of Australia, which would prefer to see a lower $A.

Dr Shane Oliver, Head of Investment Strategy and Economics and Chief Economist at AMP: l is responsible for AMP Capital's diversified investment funds. He also provides economic forecasts and analysis of key variables and issues affecting, or likely to affect, all asset markets.