Published by Team Navigate Financial on May 18, 2017

In January 2016 the Australian dollar fell to just above $US0.68, its lowest level since 2009 and down 38% from its 2011 high. But since then, after a brief rebound, it has been stuck in a range between $US0.72 and $US0.78, defying our expectations for a decline. This note looks at why the $A has been so resilient over the last year, why we still think its longer term downtrend will resume and what it all means for investors.

What drives the $A?

Over the long term, the Australian dollar tends to move in line with relative price differentials. This is the theory of purchasing power parity (PPP) according to which exchange rates should equilibrate the price of a basket of goods and services across countries – see the next chart. So if over time Australian inflation and costs rise relative to US inflation and costs, then the value of the $A should fall relative to the $US to maintain its real purchasing power and competitiveness. But in the short to medium term, swings in the $A are largely driven by swings in the prices of Australia's key commodity exports and hence the terms of trade (when they go up the $A tends to rise and vice versa) and relative interest rates such that a rise in US rates relative to Australian rates makes it more attractive to park money in the US and hence pushes the $A down and vice versa. The positioning of investors also has an impact in the short term. Suppose investors are underweight the $A and then commodity prices rise encouraging them to close their underweights – this can add to upwards pressure on the $A.

Why the bounce a year ago & relative "stability" since?

These shorter-term forces were evident in the Australian dollar’s bounce back from below $US0.70 in January last year and relative stability in the $A since.

First, late in 2015 and early last year there was a lot of negative sentiment towards Australia with talk about a "big short" in property, banks and the $A as another round of calls for a crash in property prices did the rounds. This contributed to a big build up in speculative short or underweight positions, which left the $A vulnerable to positive news and set the scene for a rebound.

Third, the US Federal Reserve delayed raising interest rates last year and this reduced upwards pressure on the $US.

Fourth, while RBA rate cuts last year helped prevent the $A from rising through $US0.78, so far this year there has been a feeling that Australian interest rates have bottomed and the next move is up with some saying later this year.

Finally, the rebound and then relative resilience in the $A has been consistent with a "risk on" environment as the $A is seen as a "risk on" currency, ie it’s strong when global conditions and growth assets improve and it’s weak when they deteriorate.

Three reasons why the $A is likely to fall

At current levels, the Australian dollar is roughly where it should be against the $US on a purchasing power parity basis. This is apparent in the next chart which shows where the $A should have been over time if it had moved to equilibrate relative consumer price levels between the US and Australia. 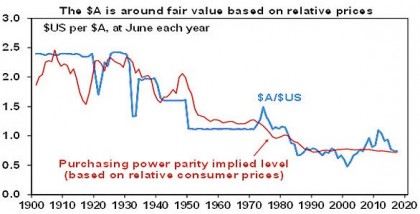 Right now, fair value on this measure is around $US0.75, which is not far from the current level for the $A. But as can be seen, the $A rarely spends much time at the purchasing power parity level and tends to be pushed to extremes above and below it.

Our assessment is that a resumption of the downtrend in the $A seen since 2011 is likely for three reasons.

First, commodity prices likely remain in a long-term downtrend thanks to a surge in supply after record investment in resource projects. Raw material prices go through roughly 10 year upswings followed by 10 to 20 year downswings. These long-term moves reflect long lags in supply. For example, if commodity prices surge after years of undersupply, producers initially don't believe it’s sustainable but, after several years, start to invest in new supply by which time the cycle is peaking. Then, when the new supply comes on stream it accentuates the downswing and it all repeats in reverse. 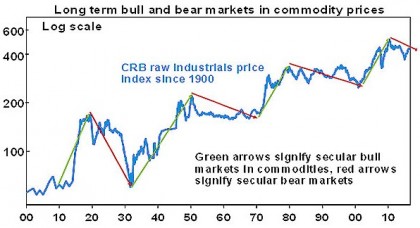 Of course there are cyclical swings in commodity prices within these long-term moves and the recent bounce in commodity prices was one of those, but the iron ore price has since come back down again and oil prices have struggled to maintain upwards momentum with rising supply constraining both.

Second, the interest rate differential in favour of the $A is likely to narrow further as the Fed continues to hike rates and the RBA remains on hold or maybe even cuts rates. This will make it relatively less attractive to park money in Australia putting downwards pressure on the $A. The Fed is on track to hike rates again in June and September as the US economy continues to improve as highlighted by a tightening jobs market. This will take the Fed Funds rate to a range of 1.25-1.5%. If the RBA leaves rates on hold at 1.5%, which is our base case, then the gap between Australian and US official interest rates will have virtually closed by September, from 4.5% in 2011. As the next chart shows, periods of a low and falling official interest rate differential between Australia and the US usually see a low and falling Australian dollar. 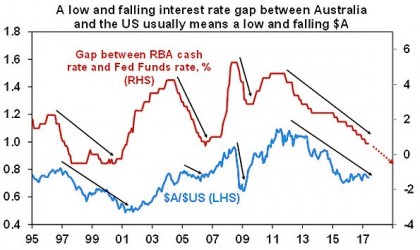 While our base case is that the RBA is on hold, there is a high risk that it may have to cut rates again later this year as we may go through a bit of a soft patch in growth, which is contrary to the RBA's own forecasts. The contribution to growth from housing is set to slow as falling building approvals flows through to slowing housing construction and slowing home price gains in Sydney and Melbourne dampen wealth effects, at a time when consumer spending is subdued, mining investment is still falling and cyclone Debbie has disrupted coal export volumes.

Public infrastructure spending will provide an offset but there is a risk of another negative quarter for GDP in either the March quarter just passed or the current June quarter or at least subdued growth in both. Which in turn points to continuing high underemployment and record low wages growth. All of which suggests downside risks to inflation. Against this backdrop, we ideally need the $A to fall further to help support growth in export-oriented sectors like tourism and higher education to help boost overall economic growth. The bottom line though is that there is more risk that the RBA will cut rates than hike them by year end and if the RBA does cut, the interest rate differential in favour of the $A will go negative this year.

Of course the financial stability risks associated with continued strength in the Sydney and Melbourne residential property markets have been cited as a significant constraint on the RBA cutting rates again, but this constrain looks like it will fade over the next six months. The peak in home price growth in these cities has likely been seen with the combination of bank rate hikes, tightening lending standards, surging unit supply and a reduction in expenses that can be claimed under negative gearing all likely to help drive a slowing going forward.

Third, speculative positioning in the $A has gone from short at the lows early last year to long now, which leaves the $A vulnerable to any further commodity price softness, Fed rate hikes and or RBA cuts. 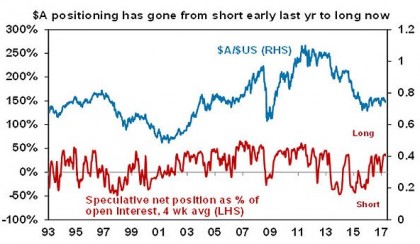 In short, our assessment is that the $A will resume its downswing and will likely fall below $US0.70 by year end.

With the risks skewed towards more downside in the value of the $A, there are several implications for investors.

First, there remains a strong case to maintain a decent exposure to offshore assets that are not hedged back to Australian dollars. A decline in the value of the $A boosts the value of an investment in offshore assets denominated in foreign currency by one for one. This can be seen over the last five years where the fall in the value of the $A turned a 12.2% per annum (pa) return from global shares measured in local currencies (US dollars, Yen, Euros, etc) into a 17.7% pa return for Australian-based investors when measured in Australian dollars. Over the same period, Australian shares returned 11% pa which is good, but it paid to have money in global shares, particularly on an unhedged basis.

Second, if the global outlook turns sour, having an exposure to foreign currency provides a useful hedge for Australian-based investors as the $A usually falls (and foreign currencies rise) in response to weaker global growth.

Finally, a further leg down in the value of the $A would be positive for Australian sectors that have to compete internationally like tourism, higher education, manufacturing, agriculture and mining.