Since Donald Trump was elected President back on November 8, 2016 we have focussed on whether we will see Trump the rabble-rousing populist or Trump the business-friendly pragmatist. Despite lots of noise – particularly via Trump’s frequent tweets – for the most part Trump the pragmatist has dominated so far. But we have clearly seen a swing to Trump the populist this year – raising risks for investors.

So far Trump has been good for markets

In the period since his election US shares are up 34%, global shares are up 28% and Australian shares are up 21%. While the strength in share markets would have occurred anyway given stronger global growth, US tax reform, fiscal stimulus and deregulation have clearly helped and contributed to the US share market’s outperformance. While US tax reform and tax cuts have received much focus, the Trump administration’s focus on deregulation is equally as significant with the US under Trump seeing the least amount of new economically significant regulation since the Reagan Administration in the early 1980s. 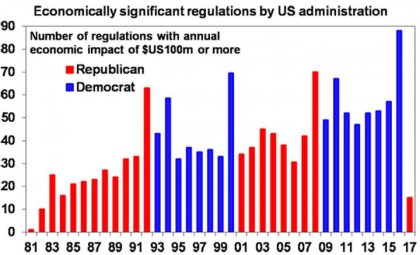 In terms of tax reform and deregulation the Trump Administration has much in common with Reaganomics.

This year though the balance has shifted towards a greater emphasis on populist policies – notably protectionism and criticism of China, the return to sanctions on Iran and arguably recent criticism of the Fed for raising interest rates and pushing up the US dollar. There are several reasons for this shift in emphasis: the pro-business element of Trump’s policies were mainly completed last year; it’s a mid-term election year so Trump is back in campaign mode; Trump’s approval rating has improved despite this year’s controversial policies suggesting firm support for them from his Republican party base; and the strength of the US economy has also emboldened him. In fact, it could be argued that last year was all about bolstering the US economy ahead of this year’s more controversial policies.

The main risks around President Trump centre around five key issues: the rising risk of a full-blown trade war; the expanding budget deficit; the risk of interference in the Fed; the return of sanctions on Iranian oil exports threatening wider Middle East conflict; and the risk Trump ultimately comes into trouble with the Mueller inquiry. We will now look at each of these in turn.

This issue has been done to death but won’t go away. So far the tariff increases actually implemented amount to just 3% of total US imports. While this has been met with proportional retaliation by other countries it’s a long way from a full-blown global trade war. However, the issue is what happens next. Another $US16bn of Chinese imports will likely be hit with a 25% tariff soon and the US is readying a 10% tariff on another $US200bn. Trump is also threatening to raise tariffs on all $US550bn of Chinese imports. China is threatening to retaliate proportionally although it will have to be with other means as it only imports $US130bn from the US. Trump is also threatening to put tariffs on auto imports and looking at Uranium.

News of a deal between the US and the EU to work towards zero tariffs on industrial goods is good news in terms of heading of a full-blown trade war between the two, but negotiations have a long way to go. There was hope of a deal with China in May – with Trump initially crowing about a May 20 trade deal, but since then both China and the US have dug in with Trump tapping popular support for protectionism and anti-Chinese sentiment. So, the trade threat could get still worse before it gets better which means it risks taking the edge off economic growth. Modelling by Citigroup of a 10% tariff hike by the US, China and Europe showed a 2% hit to global GDP after a year. Of course, we are not seeing a tariff hike on all goods but the impact could still be significant if negotiations with the EU and China fail and all the tariffs being talked about are implemented.
There are a few offsetting factors. First, China is moving to provide stimulus to support growth. Second, much of Trump’s approach still looks designed to apply “maximum pressure” to reach a negotiated outcome – and so far so good in relation to Europe. And Trump knows that the costs to US workers (from soybean farmers to Harley Davidson workers) and consumers will escalate as more tariffs are imposed. So, our base case remains that some form of negotiated solution will be reached, but in relation to China this may not occur until next year.

Interference in the Fed and US dollar

Trump’s recent comments criticising Europe, China and others for helping drive the US dollar up and the Fed for raising interest rates naturally raises concerns that he will intervene in foreign exchange markets and interfere with the Fed. The comments lack economic logic – if “making America great again” means stronger US economic growth then it also means higher US interest rates and a higher US dollar – and maybe the Fed came in for a serve after Fed Chair Powell observed that “countries that have gone in a more protectionist direction have done worse”! Trump’s annoyance may have been triggered by the slide in the value of the Chinese Renminbi. While this looks to be mainly a strong $US story (as the $US is up around 7% against its low earlier this year against a range of currencies compared to an 8% gain against the Renminbi) the Chinese authorities seem quite content to let it fall for now and this will obviously offset Trump’s tariffs on Chinese goods. 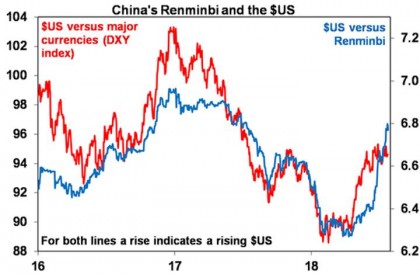 Despite all this it’s unlikely in the short term that Trump will act on his opinions on rates and the $US. US Treasury Secretary Mnuchin said the administration would “not interfere with the decisions of the Fed or move to manipulate the value of the dollar.” Trump is well known to be a high debt/low interest rate guy so it’s no surprise he is not happy with rising rates. But the Fed answers to Congress, has a mandate to keep inflation down and will do what it sees best – which with strong growth and at target inflation means returning interest rates to more normal levels. However, longer term there is a risk that Trump will weaken the institution of an independent central bank targeting low inflation and may also seek to return to a more interventionist approach regarding the US dollar, particularly if America’s trade deficit refuses to fall. Based on past experience such political intervention would risk much higher inflation which would be a big negative for investment assets as the revaluation that occurred as we moved from high inflation to low inflation would reverse. Fortunately, we are not there yet.

The expanding US budget deficit

It’s been the norm for the US budget deficit to blow out when unemployment rises (as tax revenue falls and jobless claims go up) and decline when unemployment falls. Thanks to Trump’s fiscal stimulus it’s now blowing out when unemployment is collapsing and looks to be on its way to 5% of GDP. This raises three risks. First, it may mean higher than otherwise interest rates and bond yields as the Fed may have to raise rates more than would otherwise be the case to stop the economy overheating and the Government’s competition for funds results in higher bond yields. So far there is not a lot of evidence of this with US bond yields remaining relatively low – presumably held down by low global bond yields and trade war fears – but its still a risk as US inflationary pressures rise. 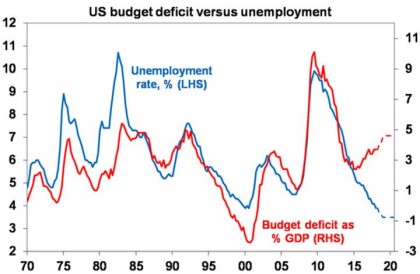 Second and more fundamentally it begs the question of debt sustainability when the next recession arrives given US public debt is already around 100% of US GDP. Finally, US fiscal stimulus by adding to the US savings-investment imbalance is adding to the US trade deficit and so is completely inconsistent with his trade policies. Even if there was a completely level playing field on world trade America will still have a trade deficit!

The return to sanctions on, and tensions with, Iran

Perhaps a big surprise this year for some has been that President Trump looks to have swapped a half decent deal with Iran for a dodgy one with North Korea. While the latter holds out the hope of (maybe) reducing the threat of a nuclear attack on the US, the return to sanctions and tensions with Iran risks higher oil prices. Since the lows of 2015 oil prices have increased by 70% reflecting increased demand and OPEC’s 2016 cutback. Global stockpiles and spare capacity have been rundown and supply from Libya and Venezuela is uncertain. Our base case is that demand growth will be more constrained from here and that a ramp up in US shale oil production will help contain oil prices around $US70-75 a barrel. The risk though is that the loss of around 800,000 barrels a day of Iranian oil exports and the renewed risk of wider conflict in the Middle East associated with Iran (eg, if Iran closes the Strait of Hormuz through which 20% of global oil supply moves in retaliation against US sanctions) results in higher prices.

The Mueller inquiry into Russian links

Our view in relation to the Mueller inquiry remains that unless Trump has done something very wrong the Republican controlled House will not move to impeach him and even if a Democrat controlled House post the mid-terms did, the Senate will not have the necessary two thirds of votes to remove him from office. However, his sensitivity over the issue, along with his comments seemingly favouring Russian President Putin’s word over US security agencies does remind a bit of Nixon in relation to Watergate. So his removal cannot be ruled out. But this would just mean VP Mike Pence would take over with basically the same economic policies (but with less tweet noise) and economic conditions are stronger than in 1974.

The risks around Trump are real and need to be watched carefully. But Trump generates a lot of noise and much of it is contradictory and confusing – in the last week Trump tweeted “Tariffs are the greatest” only to tweet 12 hours later that “I have an idea for them. Both the US and EU drop all tariffs” – and often reflects bluster ahead of negotiations – recall his “fire, fury and frankly power” threat to North Korea. So the best approach for investors in relation to Trump is to turn down the noise.