Where are we in the unlisted commercial property cycle

Unlisted commercial property (office, retail and industrial) and infrastructure have had strong returns this decade. For commercial property, since 2010 returns have averaged nearly 11% pa. This initially reflected a recovery from the slump associated with the global financial crisis (GFC) and then a search for decent income bearing investments from investors in response to falling interest rates and bond yields that has pushed up property values and hence pushed property yields (basically rents divided by property values) down to record lows. But have yields been pushed too low? And will it reverse with global interest rates starting to bottom/move up?

Commercial property and the investment cycle

Bonds do well in the economic downturn phase as interest rates fall and when inflation is still falling. Shares tend to lead the economic recovery as they respond first to easy money and as far sighted investors sniff out recovery and continue doing well as profits rise before coming under pressure from tight money and fears of a new downturn. Real assets do relatively well later in the cycle as: it takes longer for easy money to flow into them; the valuation process results in a lag; and they tend to move more with current economic conditions which drives rent.

Our assessment is that the current investment cycle is starting to mature, and that central banks gradually exiting easy money will drive a rising trend in bond yields, albeit this will be slow. So, the tailwind from falling yields for unlisted assets will fade.

The collapse in commercial property yields

The next chart shows average yields for office, retail and industrial property and for a weighted composite across all three. With each 0.25% fall in commercial property yields roughly translating to a 4.25% capital gain and with average commercial property yields having fallen from 7.3% to 5.25% since 2009 this has provided a huge boost to return, averaging roughly 4.2% pa. Values today are nearly 40% above where they were in December 2009 thanks to the plunge in yields. 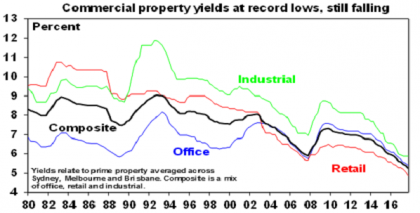 While Australian Real Estate Investment Trusts (A-REITs) are more volatile, they provide a good lead for unlisted commercial property and their weakness since 2016 signals some caution. 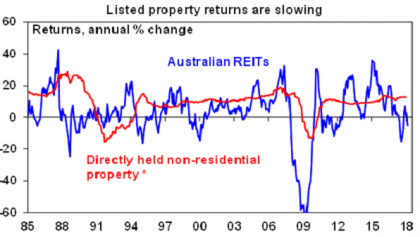 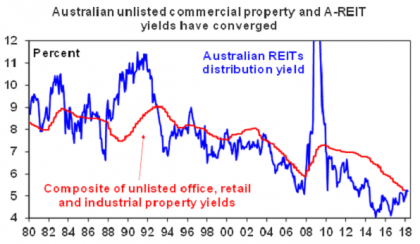 Unlisted property versus housing and bonds 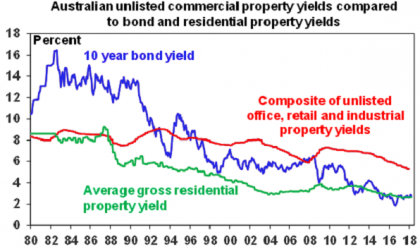 While the Australian 10-year bond yield is up from its lows, the gap between the average commercial property yield and the bond yield remains very wide, unlike in 2007 when it closed.

The biggest risk regarding commercial property is if bond yields back up sharply as global growth and inflation rises. Of course, comparing the bond yield with the average property yield is not strictly correct as the former is a nominal yield while the latter is real yield. So, a better comparison is to look at the risk premium offered by commercial property over bonds. The next chart shows a proxy for this. It assumes that rental and capital growth will average 2.5% pa over time (ie, in line with average inflation) and adds this to the average non-residential property yield to give a guide to potential total returns. The 10-year bond yield has been subtracted to show a property risk premium. While it’s been falling it remains high and above its historical average, suggesting a still decent buffer against rising bond yields.

Commercial property has in fact been a beneficiary of investor flows during periods of rising bond yields in the past. This happened in the bond crash of 1994 and in the gradual backup in bond yields that occurred prior to 2007 as investors simply switched out of bonds into commercial property that offered higher yields at a time when leasing conditions were strong. 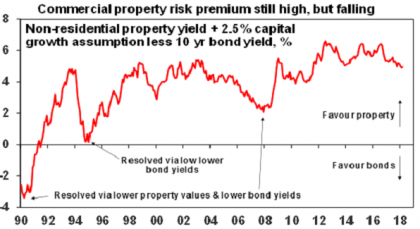 Property was vulnerable in 1990 and 2008 as the property risk premium was far less attractive than now & leasing deteriorated in the face of rising supply and a fall in space demand.

The demand and supply for space

Which brings us to leasing conditions, which typically perk up later in the cycle. While leasing conditions remain more difficult in the Perth and Brisbane office property markets due to oversupply and weaker economic conditions (albeit vacancy rates there look to have peaked) and in retail property as a result of tougher consumer conditions, a switch in consumer demand to “services” relative to goods and online competition, it’s been improving elsewhere, noticeably in the Sydney and Melbourne office markets where vacancy rates have fallen to around 6% with more downside ahead and rents are rising strongly. There is a risk around early next decade when new office supply will hit but that’s a while a way and it still looks Ike a non-event compared to the early 1990s. See the next chart. 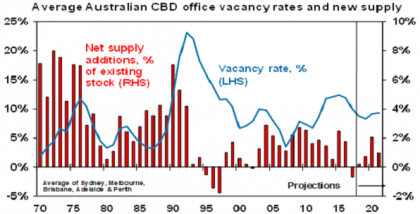 Return outlook and what to watch

Our expectation is for a gradual rise in bond yields (to around 3.5% by end 2019 for Australian 10-year yields) and that a US recession won’t be a risk until around 2020. Against this backdrop, overall returns from unlisted commercial property are likely to remain strong for a while yet as stronger leasing conditions take over from yield compression as a key return driver. However, returns are likely slow to around 9.5% as the “search for yield” tailwind fades. Office is most attractive with retail least, as the great re-rating of retail relative to office that occurred over the last 30 years and saw retail yields fall below office yields looks at risk of some reversal as various cyclical & structural factors contain retail rental growth relative to office.

The choice between unlisted commercial property and A-REITS is now line ball with the latter having reversed their recent outperformance and now offering similar yields to unlisted.

The key threats to watch for are a sharp rise in bond yields and a deterioration in the global/Australian economic outlook.